Duterte complains of aching spine on way to Palace event 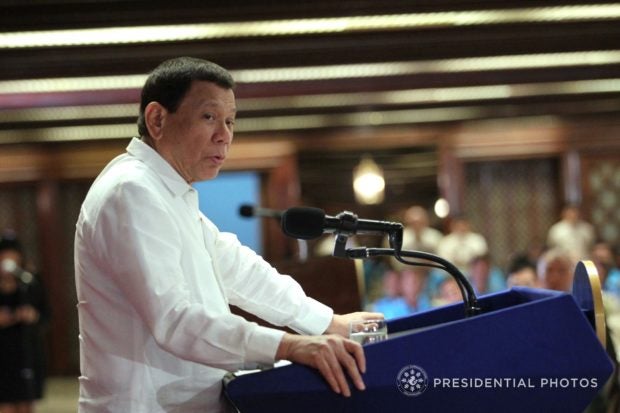 President Rodrigo Duterte complained on Tuesday of an aching spine.

In a speech during the oath-taking of the Presidential Anti-Corruption Commission in Malacañang, Duterte apologized for being late to the event because he had to take medications for his aching spine.

“You know, I asked for your pardon for being late. Late ako doon sa ano kasi…started late. Pagdating ko medyo my spinal is acting up again so I had to pass by the house to for my medications,” Duterte said.

Duterte was about an hour and a half late for the 5 p.m. oath-taking event.

He came from the GoNegosyo 10th Filipina Entrepreneurship at the World Trade Center where he was a guest of honor. He started his speech at around 3:40 p.m. and ended at around 4:40 p.m.

It is unknown which house the President was referring to, but he stays at Bahay Pagbabago in front of Malacañang Palace in Manila.

In 2016, Duterte said he had suffered from a slipped disc caused by a motorcycle accident 10 years ago.

He said he had four “non-life threatening” ailments, including Barrett’s esophagus and Buerger’s disease.

Despite his own admission, however, Duterte refused to disclose his medical records.

Read Next
Fire razes residential area in Quezon City
EDITORS' PICK
Over 3 Million worth of prizes to be won at Smart Padala’s SENDali Manalo Promo!
Gear up and get ready to play with Yamaha Mio Gear
Acer starts the year off strong with the Aspire Vero National Geographic Edition
If elected VP, Sara Duterte will push for mandatory military service for all Filipinos
Senate bill seeks to penalize employers requiring employees to work during rest hours
Marcos-era elections: Not what his son signed up for
MOST READ
Jose Manalo’s son Benj pays tribute to late mother: ‘You’re a testimony of God’s love’
‘Sampal sa gobyerno:’ Drilon wants unvaxxed PAO chief barred from working
Vice mayor slams Vico Sotto for turning Pasig into a ‘puro palabas’ city
Bongbong-Sara tandem names 7 candidates in initial senatorial slate
Don't miss out on the latest news and information.