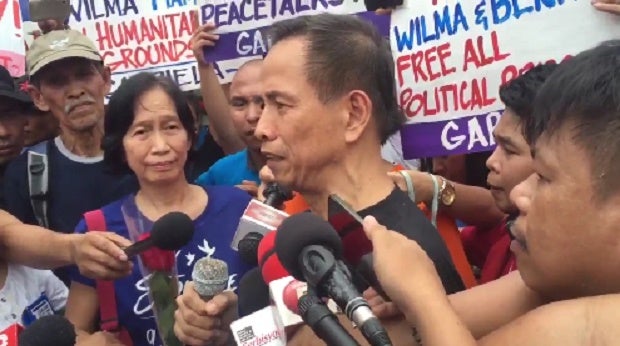 The camp of Communist Party of the Philippines (CPP) leaders Benito and Wilma Tiamzon said on Wednesday that they would appeal a Manila Regional Trial Court (RTC) decision ordering the rearrest of the couple.

Tiamzons’ co-counsel and National Union of Peoples’ Lawyers (NUPL) president Edre Olalia maintained that the peace process has not yet been properly terminated in accordance with the “solemn and binding protocol mutually agreed upon by the parties.”

“A motion for reconsideration, even if seemingly a long shot under the present circumstances, remains a legal option,” Olalia said in a statement.

“A unilateral declaration by one side without the proper written notice duly receipted by the other, no matter how categorical yet at the same unjustified, does not make the grade and does not bind the latter,” he added.

In a January 11 decision released publicly on Wednesday, Manila Regional Trial Court (RTC) Branch 32 ordered the arrest of the Tiamzons, together with co-accused National Democratic Front (NDF) consultant Adelberto Silva, as it granted the Department of Justice (DOJ)’s earlier motion for recommitment and cancellation of bail.

The court said that following President Rodrigo Duterte’s official termination of the peace talks through Proclamation No. 360, there was no more reason for the Tiamzons and Silva to enjoy temporary liberty.

Olalia, who also sits as NDF negotiating panel legal consultant, said that the camp was “not fussing over mere procedure but is warranted by fairness, practicality and principle.”

“No one in his right mind will participate in any peace negotiations if the protections and guarantees of safety and immunity for such involvement can easily be brushed aside, even under the colorable legal theatre of one party,” he pointed out. /je

Read Next
Sereno had nothing to do with delays in release of survivorship benefits – SC exec
EDITORS' PICK
High-risk pregnancy: Reducing your risk is in your hands
House energy committee chair Arroyo bats for cheap electricity
Geek out at TOYCON 2022 powered by Smart Signature
Bongbong Marcos holds first Cabinet meeting
‘Weak surge’ in COVID cases over in 2 weeks, says Octa
Lawmakers seek revival of PH history as separate subject
MOST READ
Don't miss out on the latest news and information.