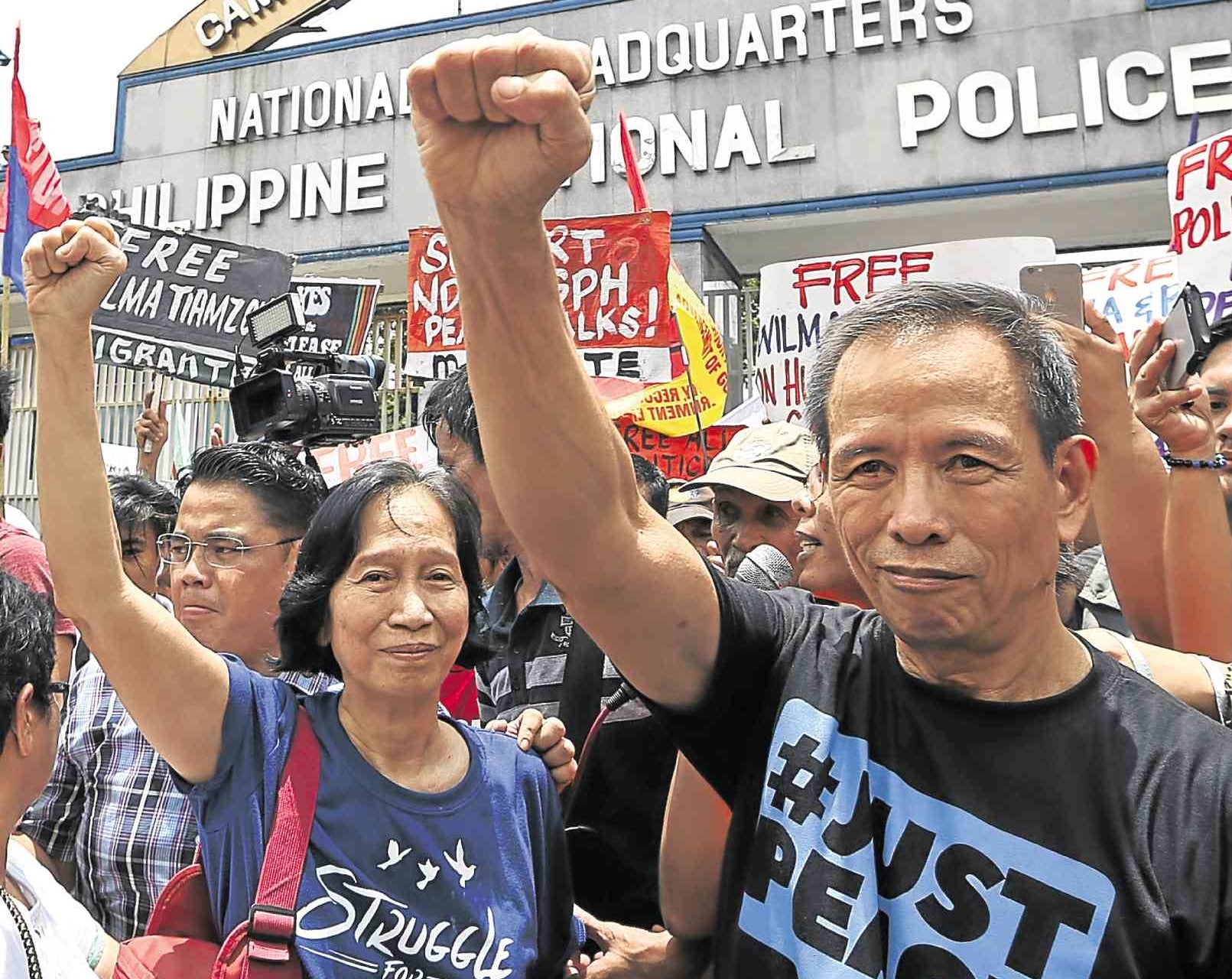 In this file photo, Communist Party of the Philippines leaders (right and left) Benito Tiamzon and his wife, Wilma, raise clenched fists as they walk out of police detention on August 19, 2016, to join rebel negotiators in peace talks in Norway. PHILIPPINE DAILY INQUIRER / NIÑO JESUS ORBETA

A Manila Regional Trial Court (RTC) has ordered the rearrest of Communist Party of the Philippines (CPP) leaders Benito and Wilma Tiamzon.

In a Jan. 11 decision released publicly on Wednesday, Judge Thelma Bunyi-Medina of Manila RTC Branch 32 ordered the arrest of the Tiamzons, together with co-accused National Democratic Front (NDF) consultant Adelberto Silva granted the Department of Justice (DOJ)’s earlier motion for recommitment and cancellation of bail, which amounted to P100,000 each.

Bunyi-Medina said the court found “no reason to further allow their temporary liberty” following President Rodrigo Duterte’s Proclamation No. 360,  which terminated the peace negotiations between the government and the NDF.

“Inarguably, the sole reason for their grant was to enable said accused to participate in the peace process,” Medina said.

The RTC issued separate warrant of arrests against the Tiamzons and Silva with no bail recommended.

The Tiamzon couple and and Silva were released after posting bail in August 2016 in time for the resumption of the peace talks between the government and the NDF.

The trio’s lawyer, Edre Olalia, said his clients would file a motion for reconsideration.

Olalia explained that, despite Duterte’s proclamation, the peace talks have yet to be formally terminated.

“A unilateral declaration by one side without the proper written notice duly receipted by the other, no matter how categorical… does not make the grade and does not bind the latter,” Olalia said in a statement.

A motion for reconsideration, “even if seemingly a long shot under the circumstances, remains a legal option,” he added.

Military intelligence agents arrested Tiamzon, chair of the Communist Party of the Philippines (CPP), and Wilma, CPP secretary general, on March 22, 2014 in Alouguinsan, Cebu. Mr. Duterte ordered their release in 2016 so they could join the rebel peace panel in Norway. /je /atm