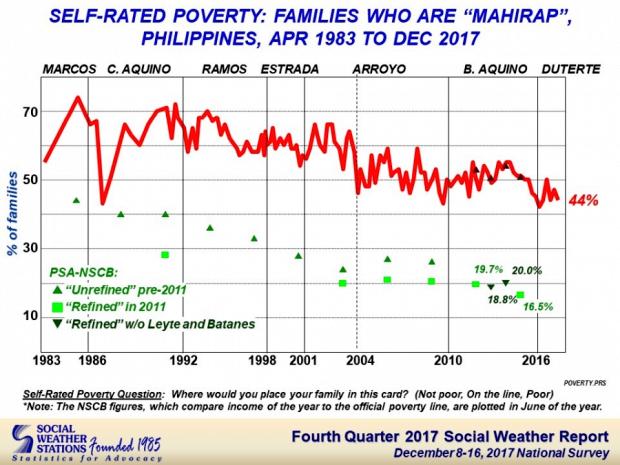 Self-rated poverty among Filipinos rose to 46 percent in 2017 from 44 percent in 2016, even as the Philippine economy recorded one of the fastest growth rates in the region, data from a recent nationwide survey showed.

But the number of families that considered themselves poor in the last quarter of 2017 declined to about 10 million from 10.9 million the previous quarter, according to Social Weather Stations (SWS).

An average Filipino family has five members. A household must earn at least P15,000 a month so as not to be considered poor, SWS said. The amount was P10,000 for Mindanao and P20,000 for Metro Manila.

For a household not to be considered food-poor, it must have a monthly food budget of P6,000, according to SWS. The amount was P5,000 in Mindanao and P7,500 in Metro Manila.

Malacañang on Wednesday said it was pleased that the number of Filipinos who rated themselves poor had gone down 3 percentage points in the last quarter of last year.

In a media briefing, presidential spokesperson Harry Roque noted the percentage of Filipinos who considered themselves poor dropped from 47 percent in September to 44 percent in December.

When it was pointed out that the 3 percentage-point drop was equivalent to the survey’s margin of error, Roque said: “It’s still an improvement, modest as it was.”

The noncommissioned survey, whose results were released on Tuesday, was conducted nationwide from Dec. 8 to 12. It had 1,200 adult respondents nationwide, with 300 each in Metro Manila, the rest of Luzon, the Visayas and Mindanao.

The survey had a margin of error of ±2.5 percentage points nationwide, and ±6 points for Metro Manila, the rest of Luzon, the Visayas and Mindanao.

In face-to-face interviews, SWS asked respondents to categorize their families based on a showcard – not poor or poor – both for self-rated poverty and self-rated food poverty.

They were also asked the minimum monthly household budget that they must have so as not to be considered poor or food-poor.

SWS attributed the nationwide decline in self-rated poverty last month to a 10-point decrease in Luzon, excluding Metro Manila, to 40 percent, and slight decreases in the metropolis (28 percent from 31 percent) and in the Visayas (53 percent from 56 percent).

Poverty up in Mindanao

But self-rated poverty rose in Mindanao to 52 percent from 45 percent.

Self-rated food poverty also rose in Mindanao (from 34 percent to 38 percent) and Metro Manila (from 20 percent to 22 percent).

But self-rated food poverty declined in the Visayas (from 38 percent to 32 percent). The incidence in the rest of Luzon was steady at 32 percent, SWS noted.

The increase in self-rated poverty and food poverty for the whole of 2017 suggested that the poor were not benefiting from economic growth.

The Philippine economy, as measured by the gross domestic product, grew 6.9 percent both in 2016 and the first three quarters of 2017.

He said the administration was also expanding opportunities in agriculture, and forestry and fisheries “to make food available in every table.”

“We assure everyone that no one will be left behind in the Duterte administration,” he said. –With a report from Inquirer Research