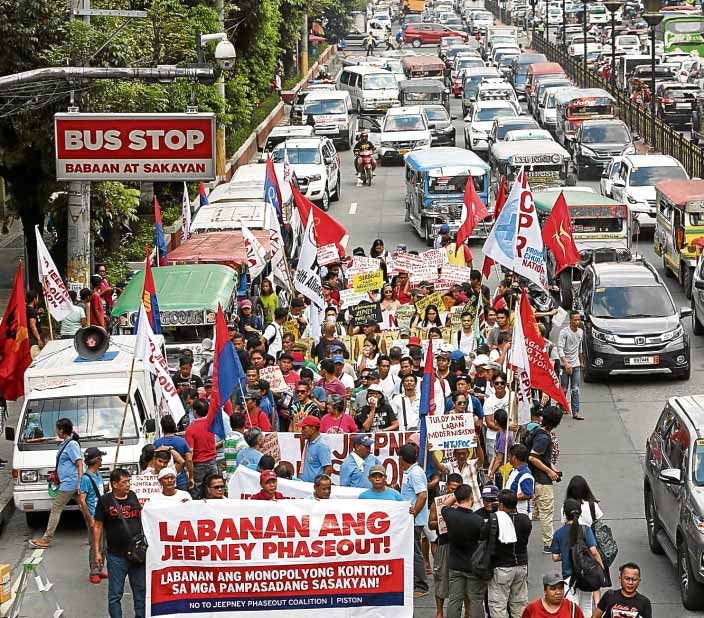 Jeepney drivers and their supporters march along España Avenue toward Mendiola in Manila earlier this month to protest the government’s plan to phase out jeepneys that are at least 15 years old under its transport modernization program. (Photo by MARIANNE BERMUDEZ / Philippine Daily Inquirer)

The public utility vehicle modernization program (PUVMP) is “not anti-poor” and is not designed to phase out jeepneys, but it’s a mechanism to “improve” the country’s public transport sector, according to presidential spokesman Harry Roque.

In a statement issued on Thursday, Roque said: “The Palace clarifies that the PUVMP of the Duterte administration is not anti-poor, contrary to the claims of some transport groups.”

“We assure Filipino jeepney drivers that this initiative of the government to improve our public transport sector will not put them out of business,” he added. “It was not designed to phase out jeepneys. In fact, the program aims to strengthen and guarantee the profitability of the jeepney business.”

According to Roque, government agencies, particularly the Department of Transportation (DOTr), are working to ensure that the concerns of jeepney drivers will be addressed.

The Department of Finance (DOF), Roque said, was offering a financing package with a 5-percent equity and 6-percent interest rate and a repayment period for up to seven years. This would be on top of the P80,000-subsidy per unit to cover the equity payment.

In addition, there is zero or low maintenance cost of new units in the first the years, which translates to savings.

Transport groups led Pinagkaisang Samahan ng mga Tsuper at Opereytor Nationwide (Piston) vowed to oppose the looming modernization program, saying that the scheme could affect some 600,000 drivers and 300,000 operators once it pushes through. /atm