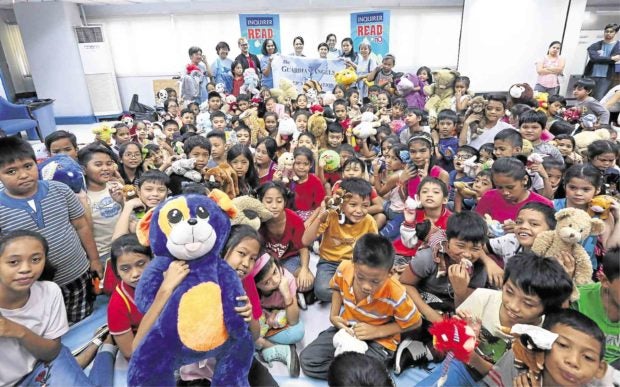 Kindness, for Christian, 12, and Jhon, 11, means being good even to bullies.

That’s what the two boys learned from Alice Mallari’s “Apolakus,” a book that tells of how the weakling Dadoy overcame bullying in school.

“Apolakus” was one of three books that veteran storytellers read to 150 children from the Tondo, Pandacan and Paco districts of Manila during the pre-Christmas celebration of Inquirer Read-Along on Saturday at the Inquirer main office in Makati.

Tales of selflessness enlivened the session that was part of the program’s theme “#ReadAlong4Kindness,” a takeoff from the “#ReadAlong4Hope” theme of the read-along festival in October.

Justo read “Estrellita, the Little Wishing Star” by May Tobias, which tells of how Estrellita sacrificed herself to become the star that the orphan Noel wished on to get well.

Rodriguez read “Apolakus,” while Vargas read “Super Ningning” by Liwliwa Malabed, which tells of a girl who was bullied but managed to overcome her insecurities by making friends.