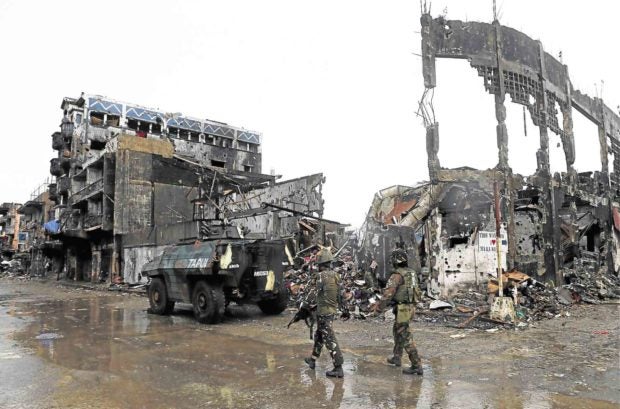 CITY IN RUINS Soldiers patrol a Marawi City street in this photo taken shortly after President Duterte declared the liberation of the Islamic city from terrorists. —JEOFFREY MAITEM

The Senate and the House of Representatives may meet in a joint session on Wednesday to discuss whether to grant another extension of martial law in Mindanao, Speaker Pantaleon Alvarez said on Saturday.

Alvarez told the Inquirer in a text message that there was still enough time to tackle the issue with the Senate.

“Kaya pa (It can still be done),” he said. “If they (Malacañang) transmit [the request] to us officially on Monday, we can already schedule the joint session on Wednesday.”

But Senate President Aquilino Pimentel III said they could only calendar the joint session with the House on Thursday at the earliest.

“I haven’t talked with Speaker Alvarez yet. But we can have a joint session on Thursday so we can finish regular legislative work up to Wednesday,” Pimentel said.

House Majority Leader Rodolfo Fariñas told reporters he did not know whether President Rodrigo Duterte would formally request an extension of martial law.

But opposition lawmakers and leftist groups have issued warnings against prolonging martial rule in the country’s south.

Albay Rep. Edcel Lagman said that in the absence of an actual rebellion or invasion, any move to extend martial law in Mindanao violated the 1987 Constitution.

He said the proposed extension of martial law “is constitutionally infirm both as to grounds and duration.”

“Martial law can only be declared and its extension authorized in ‘case of invasion or rebellion, when the public safety requires it,’” Lagman said, quoting from the Constitution.

He noted that both the AFP and the Philippine National Police admitted only the existence of “threats from remnants of terrorist groups who are reportedly recruiting fighters and regrouping to exact vengeance” against government forces.

“There is neither actual invasion or rebellion in Mindanao after Marawi City was declared by President Duterte as liberated from rebel and terrorist forces almost two months ago,” Lagman pointed out.

In July, the Senate and the House of Representatives convened in a joint session to extend the President’s Proclamation No. 216—issued on May 23, when Islamic State (IS)-inspired terrorist groups began their siege of Marawi—until Dec. 31.

Interior Undersecretary Catalino Cuy on Friday said the extension of martial law would allow government forces to continue offensives against the IS sympathizers who eluded capture during the five-month siege, as well as communist insurgents.

Left-wing groups have protested martial law because of human rights concerns, but the Supreme Court has upheld its legality.

“We have not contained all the threat groups,” Cuy told The Associated Press. “They’re still there.”

Martial law would also help the government rebuild Marawi faster and facilitate the return of about half a million people displaced by the fighting to their communities, he said.

“Although [IS sympathizers] have significantly been degraded in terms of capability and manpower, those who survived [the Marawi] siege still remain at large and are attempting to recover by recruiting other members of the society, particularly the vulnerable sector of our population,” he said.

Attacks by rebels from the New People’s Army (NPA), the armed wing of the Commnist Party of the Philippines (CPP), have also increased considerably, with the estimated damage to government and business, including burned construction equipment, rising by 2,000 percent to about P2.4 billion this year, Padilla said.

Mr. Duterte had earlier called off peace talks with the National Democratic Front of the Philippines to protest the rebels’ deadly attacks on government forces and designated the NPA and CPP as terrorists.

He indicated, however, that he was still open to a resumption of the talks if the communist insurgents stopped their assaults.

“Let’s give time for a cooling off with the Communist Party of the Philippines,” Duterte said in a speech in Bulacan on Friday. —WITH A REPORT FROM AP