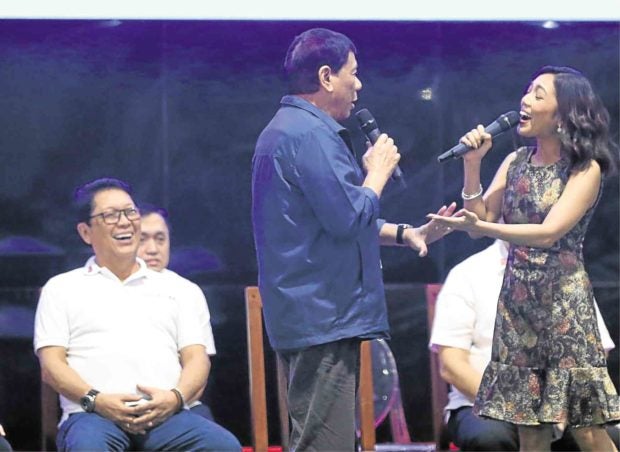 SINGING CHIEF President Duterte joins Jonalyn Viray in singing his favorite song “Ikaw” during the 84th anniversary of the Department of Labor and Employment at the Bulacan provincial gymnasium in Malolos on Friday. Laughing at left is Labor Secretary Silvestre Bello III. —JOAN BONDOC

A gloomy Christmas loomed for a government commission as President Rodrigo Duterte on Friday said he would fire the members of an entire commission on Monday for supposed corruption.

Mr. Duterte did not name the commission during his speech at the anniversary of the Department of Labor and Employment in Bulacan.

“Now, on Monday I will fire … one commission. All of them (commissioners). I don’t care if everyone was involved, or two, three. You have to go out. Because I do not think [corruption] will exist without your knowledge,” he said.

Reiterating his stance on graft, the President said government officials who engaged in corruption were pulling the country down.

Because they are independent constitutional bodies and  supposedly immune from government interference, the Commission on Human Rights, Commission on Elections and Commission on Audit are not covered by the President’s warning.

Mr. Duterte also said he would not tolerate government officials who took frequent trips abroad using public funds without good reason. Officials like these should resign, he said.

“If you are somebody who has been in and out of the country six times since you were appointed in September using public money, you should go,” he said. “There’s still time, enough for you to ponder and tender your resignation.”

The President said he had issued a directive telling officials not to travel without his permission and without good reason. They would just be on junkets wasting public money if they failed to clear the trips with him, he added.

Mr. Duterte also called on government employees to deny any personal request from his children, sibling, relatives, or other persons using his name.

The President has fired several officials who had been linked to corruption and other improper actions. Among them were Mike Sueno, the former interior and local government secretary, and Peter Lavinia, the former administrator of the National Irrigation Administration.

The President had said in the past that even a “whiff” of corruption was enough reason for him to give a government official the boot.