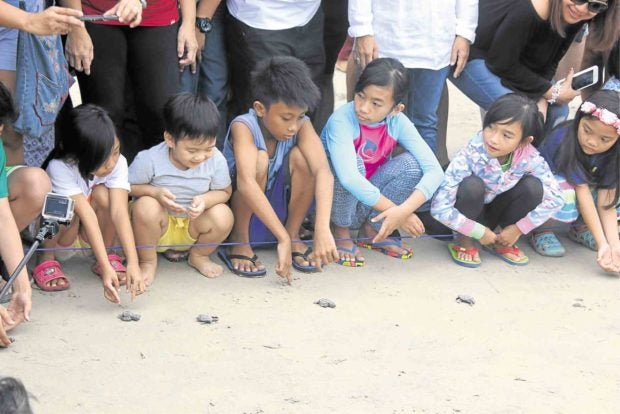 INTO THE SEA Children release newly hatched sea turtles at a beach resort in Subic Bay Freeport.—PHOTOS BY ALLAN MACATUNO

SUBIC BAY FREEPORT — After hatching in a busy beach resort here, some 100 baby sea turtles (pawikan) made their way back home on Saturday.

The olive ridley sea turtles (Lepidochelys olivacea) were born at a hatchery of All Hands Beach and began their voyage as soon as they were released back to the open sea.

“We let them crawl and reach the sea on their own. They have imprint characteristic. They imprint on the unique magnetic field of their birthplace and the female ones use this information to return to this beach to nest,” said Emerita Sebial, chief of the Protected Areas, Wildlife and Coastal Zone Management Services in Olongapo City.

The female pawikan would return to this beach to lay eggs in the next 20 to 25 years, she said.

But the journey of these from their birthplace will be difficult, according to Marife Castillo, the community environment and natural resources officer.

“Only 1 percent of this batch of sea turtles is expected to survive to adulthood because of several obstacles, including the presence of predators in the ocean,” Castillo said.

Aside from being eaten by bigger marine creatures, such as sharks and fish, baby sea turtles face threats caused by humans, including ocean pollution and poaching, she said.

“It is important that we take care of our marine ecosystem so we could help protect these marine animals from various threats to their survival in the wild,” she said.

(Chelonia mydas) and hawksbill sea turtles (Eretmochelys imbricata) have also been sighted in the province’s waters.

Amethya dela Llana, head of the Ecology Center of the Subic Bay Metropolitan Authority, said seven more nests of eggs found at All Hands Beach were expected to hatch in the next few weeks.

“This batch is the first this season. The 120 baby sea turtles released now raised to 3,877 the number of turtles that the management of All Hands Beach had released since 2011,” Dela Llana said. —Allan Macatuno