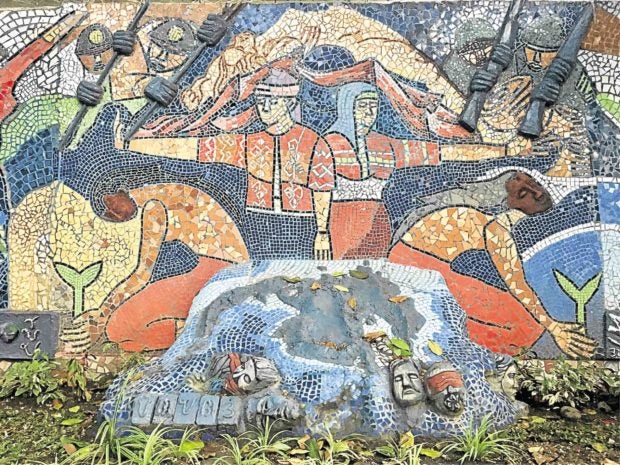 MINDANAO PANEL Artist Emil Yap depicts Mindanao as an island of death and “bloodshed” in his mosaic mural. —DEXTER CABALZA

Visual artist Emil Yap vividly described the vacant lot inside a church compound in Baclaran as “the saddest place.”

It was a dump, he recalled of the area, while the southern wall of the National Shrine of Our Mother of Perpetual Help in Baclaran, Parañaque, used to be the hangout of people down on their luck.

Most of them were overseas Filipino workers who had been duped by illegal recruiters, househelp kicked out of their employers’ home, and abused women and their children.

Today, after two years of hard work, that drab wall has become the country’s longest mosaic mural called “Panagpo,” a place of “convergence among devotees and God,” Yap said. 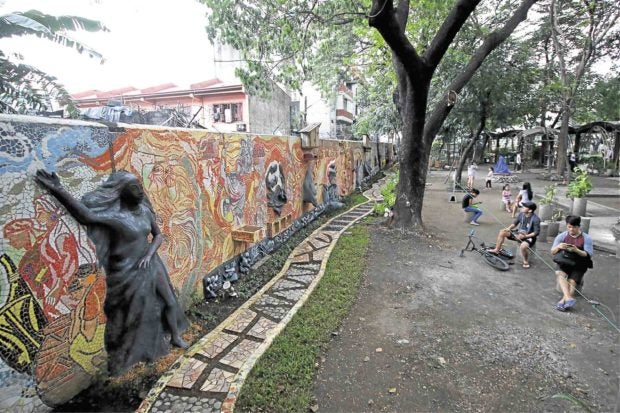 HISTORY-TELLINGChildren gaze at the “Panagpo” mural which depicts Philippine history from precolonial times to the 1986 Edsa People Power Revolution.—RICHARD A. REYES

The mural, which opens to the public today to mark International Human Rights Day, has also become therapy to the families of victims of extrajudicial killings (EJK)  in the government’s war on illegal drugs.

For 10 months, family members of drug war victims, some of them young mothers with toddlers in tow, helped paint the mural and laid down the mosaic tiles.

Bro. Geraldino Loyola, the project’s spiritual director, said the Redemptorist shrine was among the few churches that provided temporary shelter and livelihood to the families who feared for their lives.

The church’s resident psychologist also asked Yap to tap the families as part of “art therapy” to help them overcome their trauma.

Loyola and Yap said they would never forget how the families cried for joy when they finished a portion of the mosaic mural: “Our lives are like these tiles,” they said.  “We are all broken, but when we are pieced together, we become a beautiful work of art.”

Said Loyola: “That is the message we want to tell them and other Christians: that despite their sufferings, it is not yet the end of their lives. There will always be people who would help them build their hopes back.”

Sculptor Manilito Mondejar, who previously carved the statue “Flame of Courage” in the Baclaran church compound for desaparecidos, created another art in memory of child victims of EJK.

Loyola described the unnamed sculpture as “like the usual scene in tokhang drug operations  (police summary executions).   A father carries the body of his young son while holding a mallet to symbolize the workers and the poor who make up most of the victims in this senseless war.”

Others might see the church’s action as political, but Loyola described it simply as “a Christian responsibility.”

The “Panagpo” mural does just that.

The idea for the mural was first brought up in August 2015 by Fr. Joseph Echano, then the rector of the church.  Echano asked Yap to conceptualize a work of art based on Pope Francis’ encyclical, “Laudato Sí” (Praise be to you), that would also be a way to celebrate the 150th jubilee year of the icon of the Mother of Perpetual Help. 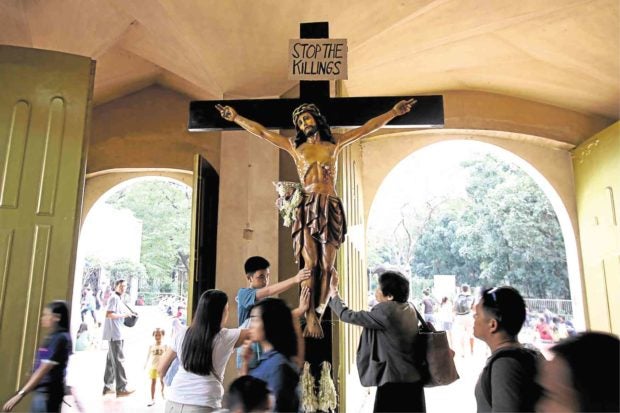 MODERN CRUCIFIXION. The sign on top of the crucified Christ reads “Stop the killings.” —RICHARD A. REYES

The Pope’s encyclical urged Catholics to take care of their common home, the Earth, that “now cries because of the harm we [have] inflicted on her by our irresponsible use and abuse of the goods which God has endowed her.”

The mural stands 3-meter (10-feet) high and 213-meter (700-feet) long, much shorter but no less symbolic that the 6.5-kilometer-long Hanoi Ceramic Mosaic Mural by the dyke walls of Red River in Vietnam.

The mosaic mural’s  two main sections are based on the Canticle of the Sun written by Saint Francis of Assisi, which was also cited by Pope Francis in “Laudato Sí”: “Brother Son” which tells the history of the country from the pre-Spanish colonization era to the contemporary years, and “Sister Moon” which depicts the lives of the “untold, silenced and marginalized sectors.”

At the foot of the mural are the country’s flora and fauna, whose names are written in ancient baybayin (prehispanic alphabet).

From a blue and green scheme to represent the myth of creation and the colonization years, the panels turn red and orange as it moves further down the country’s history.

“Our history is full of bloodshed and sacrifice for our freedom. It is through armed struggle that our society evolves and changes for the better,” Yap said, pointing out on the panels the killing of the Gomburza martyrs that led to the Philippine Revolution, the Balangiga massacre, and the Japanese

The more contemporary scenes show countless faces of women and children crying, with a mother pushing a luggage trolley on her way to a flight out of the country,  armed men pointing guns at protesters, and the island of Mindanao sitting on a number of dead bodies.

“But there’s salvation,” Yap said, pointing at the figure of the Redeemer Father near the end of the mural with his hands reaching out.

Sculptures of the “Madonna and Child”—the icon of the Redemptorists—are also scattered throughout the mural and are literally made from the prayers of devotees.

Lorena Pacampara, lead sculptor for “Panagpo,” said the more than 5,000 paper sheets came from the prayers and petitions of devotees that were ground and mixed with cement instead of being composted to make the sculptures sturdier.

“It proves that the devotees have a big hand in completing this,” she said.

The devotees also responded when the church asked for tiles to be used in the mural.  Loyola said  most of the tiles were donated, except for the red and orange tiles that were harder to source.

Yap admitted that it was a challenge to finish the mural in two years. He has the numbers —thanks to volunteer students and artists—but cutting down and intricately putting up the mosaic tiles on the mural needed intensive training.

The mural’s message, too, might be a challenge for some who might not agree with it, he added.

“However, it is our responbility as artists to show people what  happened and what is happening,” Yap said. “This is what we experience in our interaction with each other. This is reality.”

He urged the faithful to take the time  “to look at the mural, to see what is happening in society.”

“May the mural let them remember those who are suffering and include them in their prayers. May the devotees be one in aspiring for a world with no hunger, no poverty and everyone is equal,” Yap said.

“And may the faithful think beyond themselves.  When they ask for healing, may they also remember that their society is also sick,” he  added.