De Castro: Sereno ‘altered’ TRO that I recommended in 2013 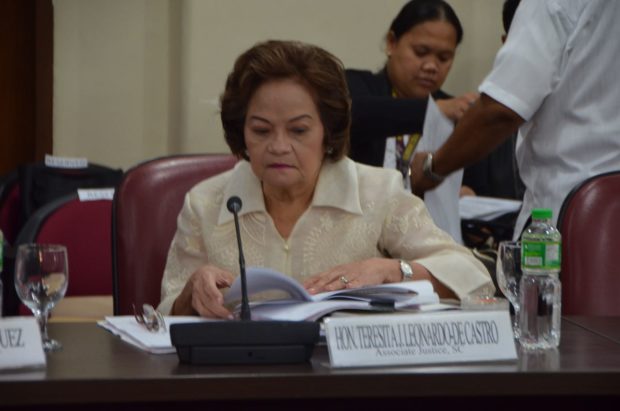 Facing the House justice committee deliberating Sereno’s impeachment on Wednesday, De Castro recalled that she wrote to Sereno questioning the chief magistrate for disregarding her recommendation over a TRO in May 2013.

De Castro recommended that the Commission on Elections (Comelec) be stopped from implementing its May 10 resolution nullifying the Coalition of Senior Citizens in the Philippines from participating in the elections on grounds that it violated the rule on term-sharing of allotted seats in the House of Representatives.

The Associate Justice said she recommended that the TRO be implemented because the partylist had already garnered enough votes to earn a seat in the House of Representatives.

What Sereno issued was a TRO stopping the Comelec from proclaiming the five remaining winners of the May 13 polling in the partylist system until the disqualification protest of the partylist has been resolved.

“So I wrote her a letter that, “You altered my recommendation. Why did you do that?” and she didn’t even call me up,” she continued.

De Castro said Sereno replied to her letter and explained to her that there were also “other cases pending in court,” prompting her to issue the said TRO.

The Associate Justice, however, denied that Sereno endured a “tongue-lashing” from her, saying the report from Manila Times newspaper was “exaggerated.”

“When I deal with her sa formal deliberation, I say what’s on my mind. Syempre minsan nagiging emphatic tayo (But of course we get emphatic sometimes) but after that we even eat together,” she said.

Complainant lawyer Lorenzo Gadon said Sereno’s alleged falsification of the TRO was one of the bases of the complaints against her for culpable violation of constitution, betrayal of public trust, corruption, among others.  /jpv