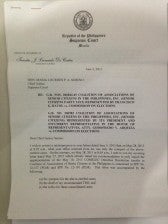 In her letter to Sereno dated June 5, 2013, De Castro said contrary to Sereno’s claim that her office only received a synopsis of the case from her, De Castro has sent on May 28 at 8:05 in the morning not only the synopsis but her recommendation to stop the Commission on Elections (Comelec) from implementing its May 10 resolution that disqualified the party-list group as well as records for the consolidated cases.

“As you are well aware, it is standard practice in the Court that a Member-in-Charge recommending the issuance of a TRO [temporary restraining order] should already submit a draft of the same to the Office of the Chief Justice for approval upon making such recommendation,” De Castro said in her letter.

However, De Castro said after verifying that Sereno had not acted on her draft, “I sent to your office at 10:00 A.M. the second version of my draft TRO and the revised synopsis.”

Then, De Castro said she was informed by the Clerk of Court that the party-list group filed a supplemental motion and the Chief Justice still has not acted on her recommendation, “I sent to your office at 1:30 P.M. the third version of my draft TRO…I trust this will enlighten you on the real circumstances that occurred on May 28, 2013 while you were out of your office.”

On Wednesday, the high court stopped the Comelec from implementing its May 10 resolution disqualifying Coalition of Senior Citizens and Abang Lingkod, which superseded the temporary restraining order issued by Sereno against Comelec to stop the proclamation of five remaining party-list winners.