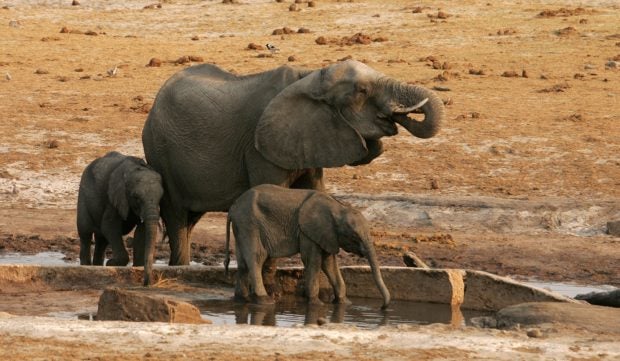 An elephant drinks water with her calves at a watering pan supplied with water pumped from boreholes powered by more than 45 diesel-powered generators which run continouosly to ensure a steady supply of water for animals in the arid Hwange National Park in Zimbabwe on September 6, 2012.  (AFP FILE PHOTO)

The move reverses a prohibition imposed under former US President Barack Obama, as it is the latest rollback of Obama-era controls on a number of fronts.

On its website, the US Fish & Wildlife Service said it “will begin issuing permits to allow the import of sport-hunted trophies from elephants hunted in Zimbabwe” between January 21, 2016 and December 31, 2018.

Thursday’s statement confirmed an announcement made earlier this week at a South African pro-hunting forum.

Zambia will also be covered under the revised rule.

Despite an overall fall in poaching, Africa’s elephant population has still dropped in part because of continued illegal killing, said a 2017 report by CITES, or the Convention on International Trade in Endangered Species.

African ivory, in particular, is highly sought in China where it is a status symbol.

“(This is a) reprehensible behavior by the Trump administration. 100 elephants a day are already killed. This will lead to more poaching,” said The Elephant Project on Twitter. Elephant Project is a group based in Florida that aims to protect the animals.

The US decision takes advantage of a provision in the Endangered Species Act, which states that the import of such trophies can be legal if accompanied by proof that the hunting benefits broader conservation of the species.

“Legal, well-regulated sport hunting as part of a sound management program can benefit the conservation of certain species by providing incentives to local communities to conserve the species and by putting much-needed revenue back into conservation,” the Fish & Wildlife Service said.

“Hunters should choose to hunt only in countries that have strong governance, sound management practices, and healthy wildlife populations,” it added.

Updated information from Zimbabwe led US officials to find “that African elephant trophy hunting in Zimbabwe will enhance the survival of the species in the wild.”

It cited data showing the country has more than 80,000 elephants.

“Selling a threatened animal’s life to raise money for ‘conservation’ is like selling a child on the black market to raise money to fight child molestation,” it said.

Trump’s sons are known to have a passion for hunting.

A photo widely shared on the internet shows Donald Trump Jr. posing with a knife in one hand and an elephant tail in the other, the animal’s corpse beside him.

The US decision follows tumultuous days in Zimbabwe, where President Robert Mugabe refuses to resign after the military seized control of the country.   /kga