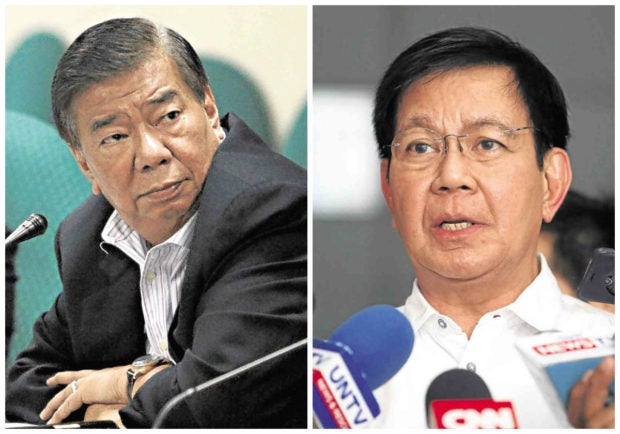 Sen. Panfilo Lacson has supported the proposal of Minority Leader Sen. Franklin Drilon to make senators present amendments to the proposed 2018 P3.7-trillion national budget on the Senate floor for transparency.

Lacson said there was reason to believe that the Duterte administration’s proposed budget next year was riddled with pork barrel funds of congressmen and senators.

He agrees with Drilon’s proposal to discuss senators’ proposed amendments openly on the floor and not secretly.

According to Lacson, current practice allows senators to submit proposed amendments in writing, which “is not clear and has no transparency.”

Drilon’s proposal, said Lacson, would give senators the chance to explain and justify their amendments.

Lacson expressed willingness to discuss proposed budget amendments in the open as he warned that this could make him unpopular with congressmen and senators who had pork in the proposed budget.

“But that is not my intention,” he said. “My intention really is for the money to be put into good use. After all, that’s tax money,” he said.

Read Next
Leni calls for unified action for Marawi
EDITORS' PICK
Nestlé Philippines’ ‘NESCAFÉ Plan’ bags Grand Anvil at PRSP 56th Anvil Awards
Smart reinforces superiority with best speed and mobile video experience in PH
Every Filipino home can now be a smart home with realme TechLife
New 3,045 COVID-19 cases push PH total active cases to 40,074
LTO’s P500-M deal for screws draws scrutiny
How to lose a PH genius: Wesley So officially a US citizen
MOST READ
US lays out list of aid to ‘satisfy’ Duterte following VFA payment demand
How to lose a Filipino genius: Wesley So officially a US citizen
Robredo on Sara Duterte leading poll surveys: Why are Filipinos drawn to leadership of this kind?
So: I lacked connections to succeed in PH ‘culture’
Don't miss out on the latest news and information.