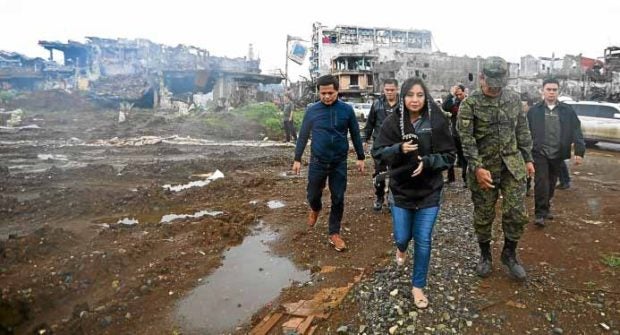 LENI ROBREDO IN MARAWI: Seeing Marawi in ruins is different from the pictures. —PHOTO FROM OVP

Pictures of Marawi’s destruction came to life for Vice President Leni Robredo when she visited the city’s so-called Ground Zero for the first time after it was declared free from Islamic State (IS) terrorists, a tour that she said was “somewhat overwhelming.”

“Of course we have seen pictures, but actually seeing it is different,” Robredo said in a statement released by her office on her trip to Marawi.

“I was even asking: If this is what I feel as a nonresident, what more those people who really live here?” Robredo said.

President Duterte last month declared Marawi liberated from IS after five months of fighting between terrorists and government forces.

After the trip, the vice president said there was a need for a “whole of nation” approach to rebuilding Marawi.

She said efforts to help the city should be unified “in order to avoid duplication.” Robredo’s visit coincided with that of Sara Duterte, Davao City mayor and Mr. Duterte’s daughter. The two, however, did not cross paths in Marawi.

Amid Robredo’s call for a unified effort, Sara and Taguig Mayor Lani Cayetano were also in the city to give aid in a separate mission.

Robredo, who arrived earlier, and Sara appeared to have similar itineraries in Marawi. They both visited St. Mary’s Cathedral but some two hours apart.

The vice president, who was with private sector partners, met with residents allowed to return to the city at the Islamic Center and distributed supplies for Mindanao State University’s training center. Robredo later met behind closed doors with local officials.

Sara proceeded to the village of Basak Malutlut and met with residents at the village’s elementary school.

They received medicines, cash, school supplies from Robredo’s group and two checks worth P5 million each from the group of Sara.

In her statement, Robredo said it was important for planners to involve residents of Marawi in the process of rebuilding their communities.

She said the sooner the rehabilitation work was done, the better it would be for residents to “recover from their grief.”

“The longer it takes us to rehabilitate, the more the people will feel downtrodden,” Robredo said.

Jobs, Robredo said, were key to helping the people of Marawi rise again.

Sara’s group also believed that employment was key to the quicker rebuilding of Marawi.

Taguig City, Sara said, was offering skills training and childhood care. Her visit to students of Basak Malutlut Elementary School, the Davao mayor said, was to “inspire them to study harder and finish their education.”

She also said the new group that she formed for her father, Tapang at Malasakit, would build a memorial in Marawi “to serve as an antiterror and peace monument.”

After visiting soldiers who fought and were still stationed in Marawi, Robredo was asked if she saw the need to lift martial law in Mindanao now that Marawi had been liberated. She refused to give a categorical answer, saying the military was in the best position to know.