Before preying on Grab driver, Delemios hurt another family 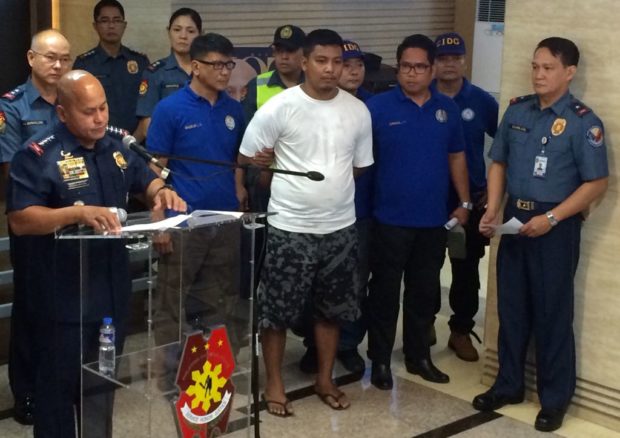 Not just one but two families want justice served now that Narc Tulod Delemios is behind bars.

The relatives of Gino Balbuena, a 19-year-old who was shot dead in October 2014, rushed to the Pasay police station around 9:30 p.m. Tuesday, an hour after Delemios surrendered.

The 25-year-old Delemios admitted robbing and killing Gerardo Maquidato Jr., the Grab driver he booked on Oct. 26. He was presented on Wednesday in a Camp Crame press briefing, where he was confronted by the driver’s widow and mother.

The Balbuenas, however, were not allowed to see the suspect as his statement was still being taken by the police.

Still, it was a welcome development for Gino’s 58-year-old mother, Gaillee. “This will be a good Christmas gift to our family from God. We will finally get justice,” she said.

Gaillee insisted it was Delemios, a friend of Gino’s, who shot her son on the morning of Oct. 10, 2014, near the corner of Bagong Sikat and Narra Extensions Streets in Baclaran, Parañaque City.

Delemios and her son were then playing basketball when Gino accidentally hit him hard with an elbow, she recalled. “(Delemios) was fuming mad when he left. A few minutes later, he returned on a motorcycle and shot my son three times,” she said.

Gino died on the spot.

A witness said Delemios was accompanied by a neighbor, Jeric Lim, who served as his accomplice.

In February 2015, Judge Rolando How of Parañaque Regional Trial Court Branch 257 issued an arrest warrant against Delemios and Lim in connection with Balbuena’s killing.

On Tuesday, Delemios sent surrender feelers after authorities gave him two days to surrender or face a manhunt as the suspect in the Maquidato case.