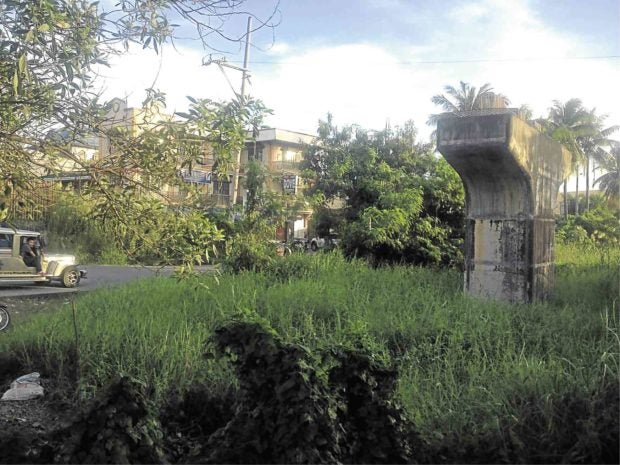 One of the concrete columns built for the shelved Northrail project stands near MacArthur Highway in the City of Malolos in Bulacan province. —CARMELA REYES-ESTROPE

CLARK FREEPORT — Japan will take the lead in completing a railway connecting Manila to Clark, while the Chinese state firm Sinomach (China National Machinery Industry Corp.) will concentrate on building a railway from Manila to Legazpi City, the Department of Transportation  said here on Wednesday.

Japan’s official development assistance will fund the construction of the P105-billion Philippine National Railways (PNR) Phase 1 project from Tutuban at Divisoria in Manila to the City of Malolos in Bulacan province, and the P211-billion PNR Phase 2 project connecting Malolos to Clark, said Timothy John Batan, transportation assistant secretary for railways.

“The projects will be constructed by Japan. It will still go through the process of bidding but only among Japanese contractors,” Batan said.

Sinomach, he said, would instead build the PNR line from Manila to Legazpi City in Albay province.

On Monday, Sinomach and the government settled a contractual dispute involving the original Northrail project that was started in the 1990s.

Transportation Secretary Arthur Tugade said both sides agreed to drop all lawsuits, sparing the government from paying over P5 billion in potential damage to Sinomach and almost P500 million in legal fees.

Sinomach had backed out from the project in 2008 after completing almost 23 percent of the work.

Concrete posts put up in 2013 for the Northrail project stand idly on MacArthur Highway in Malolos, stretching from Fausta Road to Calumpit town in Bulacan.

Glen Reyes, Bulacan provincial engineer, said the local government was not aware if the structures would be used in the new railway project.

Groundbreaking for Phase 1 of the PNR line has been scheduled in December or the first months of 2018, while Phase 2 is expected to start in 2019.

Renato Romero, vice chair of the Pampanga Chamber of Commerce and Industry, said the region had been waiting for a modern railway to Clark for three decades now.

He also urged the national government to continue investigating public officials who committed alleged irregularities that delayed the Northrail project for almost 10 years since 2008.

Angeles City Mayor Edgardo Pamintuan, chair of the regional development council, said the new railway project was “consistent with several focus programs of the Duterte administration, including the decongestion of Metro Manila and the full development of the Clark International Airport to be one of the country’s premier gateways.”

“This will result in more progressive growth for key areas of the region specifically Metro Clark and major cities and towns in Bulacan and Pampanga,” said Pamintuan.