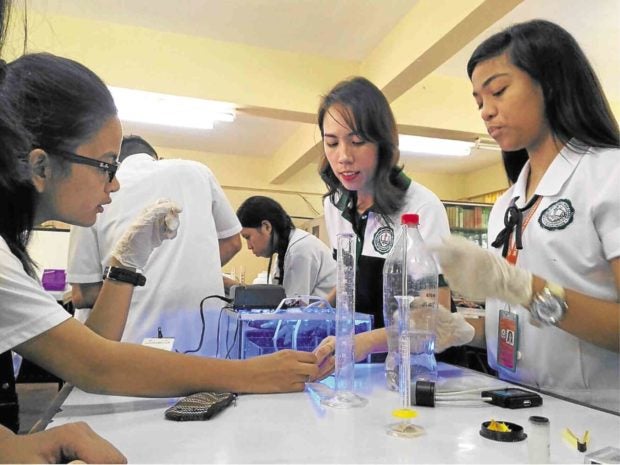 Research adviser Ma. Regaele Olarte (center) looks on as her students at Muntinlupa National High School work on a project that could bag the top prize in an international competition promoting renewable energy.—Photo by Dexter Cabalza

A science project proposal by Muntinlupa City high school teachers is vying for the top prize in one of the biggest international competitions that promote research in renewable energy.

The project will be presented at the ZFEP awarding ceremony in Abu Dhabi, United Arab Emirates, in January next year.

MNHS is one of the four finalists in the Asia bracket, which include Bahrain Bayan School, Mahindra United World College of India and Shenzhen Yadi School in China.

The winners in the category will receive a prize of $100,000 (more than P5 million) from the UAE government.

Behind the MNHS project proposal were research advisers Ma. Regaele Olarte and Jason Albaro, with its school principal Florante Marmento.

Olarte recently won the Gintong Parangal Para sa Edukasyon from the Department of Education and the insurance firm Fortune Life.

She was also featured in the Inquirer when she was named one of the Metrobank Foundation’s Outstanding Teachers in 2016.

The MNHS research offers algal biofuel as a more sustainable alternative to fossil fuels and biofuels (like those derived from corn and sugarcane).

It has a prize pool of $4 million (more than P20 million) which will be awarded to winners in different categories: corporations, small and medium enterprises, nonprofit organizations, schools and individuals.