Benguet gets ready for marijuana tourism

Province looking at niche industry as host of weed farms once law on medical marijuana is passed
Philippine Daily Inquirer / 05:50 AM November 04, 2017 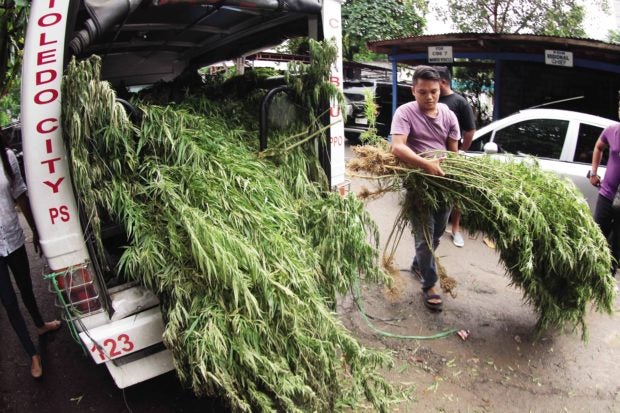 Downstream businesses could open interactive learning tours showing how marijuana is produced from seed propagation to harvest, or introduce the varieties of cannabis grown in cold upland climate, Prudencio said.

The Cordillera region had been classified as a key source of marijuana in Luzon. In 2016, P5.8 billion worth of the illegal weed was seized in drug eradication drives in the provinces of Benguet, Kalinga and Ifugao, according to the Cordillera police.

Benguet was one of the first provinces to acknowledge that it would benefit from the passage of measures enacting a Compassionate Medical Cannabis Act, among them House Bill No. 180, which was endorsed by the House committee on health in September.

But Benguet wants to ensure legal marijuana plantations will not disrupt its other thriving industry: salad vegetables. Benguet supplies at least 80 percent of the country’s semitemperate vegetables such as carrots, cabbages, potatoes, cauliflower and lettuce.

Benguet would apply for accreditation to cultivate and possibly process cannabis into medicine, Pacalso said, eyeing the province’s outskirt areas as weed farms. These are areas which have been subjects of marijuana eradication operations.

“Benguet has the suitable climate for marijuana,” the governor said, citing two towns where marijuana used to proliferate.

Pacalso said containing marijuana farms within specific towns would also help the government in monitoring production and prevent raw marijuana from being smuggled, or getting into the hands of people who were not qualified to use cannabis as a regulated drug.

According to the governor, Benguet has marijuana farmers who can be tapped to determine the most suitable variety of cannabis that can be grown in these areas.

A former marijuana cultivator, who wanted to be identified only as Romeo, said he was elated by the proposed medical marijuana law because it would provide him legitimate employment. He surrendered to the police’s “Oplan Tokhang” early this year.

Now working as a part-time carpenter and as a rice and vegetable farmer, the 40-year-old Romeo said he was lured into marijuana planting by a relative in early 2000 due to poverty.

In June, Joseph Calulut, Cordillera information officer of the Philippine Drug Enforcement Agency (PDEA), said an agency source confirmed that coffee shops in Amsterdam in The Netherlands were offering “Baguio marijuana” in their menu.

The Dutch government in 1976 decreed that it would not prosecute people caught with less than 5 grams of cannabis, and had tolerated the proliferation of about 200 “coffee shops” selling recreational marijuana.

There has been no evidence of Baguio City-based weed cultivations, so the brand name may simply imply that the source of marijuana was from a mountain, PDEA said. —KARLSTON LAPNITEN