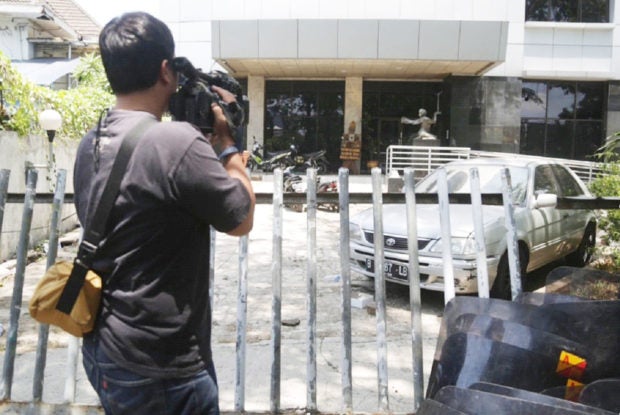 Fuelled by a hoax, a mob stormed an office in Jakarta last month to disrupt an event involving alleged communist backers. PHOTO BY THE JAKARTA POST/ASIA NEWS NETWORK

Fake news has Asians amused, bewildered and in some cases deeply anguished about the turn of events.

A growing number of such instances, coupled with the lack of adequate regulation, damaging consequences for legacy media and repercussions on efforts to build informed societies, is stoking debate anew on tackling the issue.

Two weeks ago, Bangkokians trying to navigate an overwhelming downpour were distraught by social media reports of a sudden discharge of water from dams north of the capital city, threatening to worsen the situation.

The news, it turned out, was false – it was dated to 2011, when indeed flooding had devastated the city.

Indonesians found themselves in a similar trap of worry last month, when social media reports alluded to a return of communist forces.

These played a part in encouraging mobs to disrupt a meeting of some alleged communist supporters in central Jakarta. Police fired tear gas. Five were arrested. The issue of Communism remains sensitive in the country and the timing of the reports and the incident spooked many. Sept 30th is remembered as the day in 1965 communist forces killed six army generals and a young lieutenant in a coup attempt and led to retaliatory killings.

The episode came about even as supporters of popular former Indonesian governor Basuki Tjahama Purnama, known as “Ahok”, have not been able to get over his loss in gubernatorial elections last year, in which they believe fake news tied to his Chinese ethnicity had a role to play. Among the rumours was one that many more Chinese workers would be allowed in and they would take away local jobs.

Observers say a vile desire for mischief and self-promotion among those holding on to devices promising reach and a stir if not a complete shake-up with a mere click, in less policed Asian societies is encouraging the spread of fake news, and could make situations toxic.

The nascent, innovative efforts to counter the phenomenon are far from adequate to remedy the situation. A collective effort, involving all stakeholders, could be the way to contain its potentially damaging consequences. The problem, they add, involves the young and the old, is mired in technology, is tied to several aspects of life – among them education, health, financial and well-being – and can have a bearing on community harmony as well as a country’s overall economic bounty.

“Societies have long confronted rumors. But fake news has found an ideal platform in social media, which allows the quick spread of erroneous information outside the control of institutions, such as news agencies, traditionally tasked to protect public discourse from misinformation.

“Fake news also thrives in social networks as users depend on other users not only for their information supply, but also for verification. An increasing mistrust in traditional media is being replaced by dependance on popularity ratings online, so that a post that gets viral is accorded more attention, and most likely, more credibility, when viralness does not equate to veracity, only popularity,” he said.

Many Asian countries are trying various measures to fight fake news. These include public policies setting guidelines for dissemination of content via online platforms and empowering service administrators to regulate services, as well as imposing penalties to deter purveyors of fake news.

However, the enormity of the challenge continues to befuddle many. A report this month said Baidu examines three billion claims of fake news every year.

Experts say, the technology-led fact-checking solutions by individuals do not entirely meet needs to counter fake news and they urge social media platform providers to develop more effective solutions, since they are well-versed with their technologies.

In India, for instance, the Indian government has said it is helpless in tackling fake news as it cannot access “objectionable” content because of WhatApp’s encryption, reports The Statesman newspaper.

WhatsApp has said that the problem is complex but it is looking into ways to tweak its product to minimise the spread of fake news. More than 200 million people use the platform in the country.

One of the disastrous consequences of the spread of fake news via social media was in the eastern Indian state of Jharkhand in summer (May), when mobs viciously attacked groups of strangers they thought were responsible for child-trafficking, as per “news” circulating on Whatsapp. Only later did they realise that they were wrong. Seven people died.

Dr. Elmie Nekmat, Assistant Professor at the National University of Singapore, believes that together with other efforts, the focus on making individuals more conscious and equipping them to spot fake news could be the way forward.

“A main challenge is to recognise that safeguarding against fake news boils down to individuals and that netizens need to be socially responsible to one another.

“We need to realise that it is crucial to carry out due diligence to verify the credibility of information we receive online before sharing them with others. Unfortunately, we might not be equipped with adequate skills to tell fake information from authentic ones given current technological advances in information manipulation,” he told The Sunday Times.

He added: “We might also be influenced by personal biases or be acting automatically based on habits when discerning the credibility of information sources and when disseminating news on social media. Apart from media literacy skills, we must therefore think of ways to help inculcate a sense of self-awareness and social responsibility among netizens.”