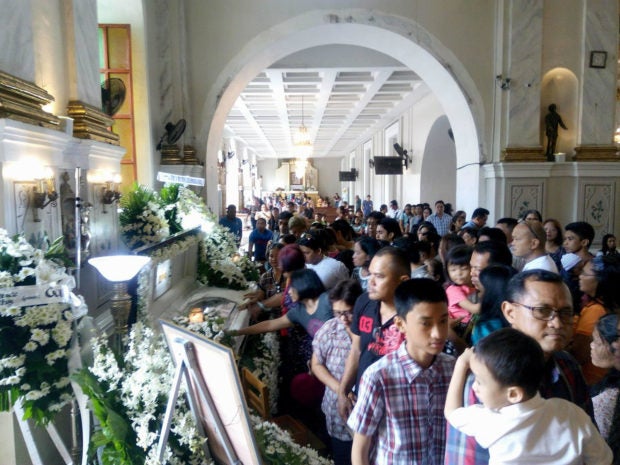 Parishioners continue to line up to pay their last respects to the late Butuan Bishop Juan de Dios Pueblos inside the St. Joseph the Worker Cathedral Parish in Tagbilaran City, Bohol, on Sunday morning before his remains will be transported to Butuan City on Sunday evening. Leo Udtohan/Inquirer Visayas

TAGBILARAN CITY, Bohol — Parishioners had lined up at the St. Joseph Cathedral the Worker Parish in this city to pay their last respects to the Butuan Bishop Juan de Dios Pueblos who died last Oct. 21 in Manila.

Many parishioners, clergy and the lay took turns attending the prayer vigil, aside from the Masses officiated at the Cathedral since Saturday afternoon when his body was brought before his interment on Nov. 7 in Butuan City where he served for 22 years.

Known to many as “Father/Bishop Didi,” Pueblos was born on March 8, 1943 in Moto Sur in Loon town, Bohol. He finished his primary and secondary education at the Loon Central Elementary School in Loon town and Sacred Heart Academy in Tagbilaran City before going to Cebu City to study at the San Carlos Major Seminary.

He was ordained a priest on March 30, 1968 and spent the next 17 years serving in pastoral and educational assignments in Bohol before being appointed as bishop and assigned in Mindanao.

On April 29, 1985, then Pope John Paul II, who is now a saint, appointed him as auxiliary bishop of Davao and later as bishop of Kidapawan in February 1987.

Pueblos was a member of the CBCP Episcopal Commission on Family Life and Permanent Committee on Public Affairs and Committee for the Cultural Heritage until he died due to a lingering ailment on Oct. 21 in Manila.

His body was brought to Tagbilaran for a 36-hour vigil to allow the Tagbilaranons to say their goodbyes.

Among them were Vera Villocido, 50, and her friends who attended the vigil.

Villocido described him as a generous man who kept smiling.

Minda Chatto, 74, who came from Balilihan town where Pueblos was previously assigned, also came to the cathedral to say goodbye.

“He was not just a priest but a friend to everyone as he would refer to his parishioners as his family,” she said as she touched the casket tenderly.

A farewell Mass was scheduled to be offered at 5 p.m. on Sunday and would be officiated by Bishop Alberto Uy of the Diocese of Tagbilaran as the main celebrant.

His remains would be loaded on a commercial vessel to Butuan City through the Jagna Port.

His interment is scheduled on Nov. 7 at the St. Joseph Cathedral in Butuan City where he served for 22 years. /je