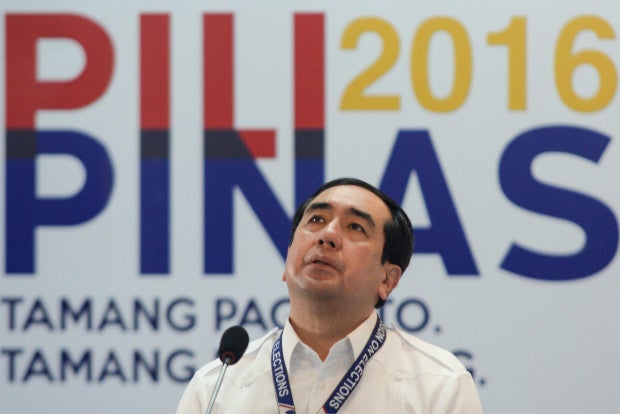 The House of Representatives justice committee on Wednesday rejected the motion to admit a substitute impeachment complaint that seeks to correct the verification errors of the first one filed against Commission on Elections (Comelec) chairperson Andres Bautista.

The committee as of press time will thus tackle the first impeachment complaint against Bautista if it is sufficient in form and substance.

The lawmakers objected to endorser Kabayan Rep. Harry Roque’s motion to admit the substitute complaint because the Hous rules are supposedly allow correction of impeachment complaints before the justice committee.

But lawmakers pointed out that the justice committee, in approving the form of the impeachment complaint against President Rodrigo Duterte, vowed that it would be the last time it would be liberal in approving a defective complaint.

Albay Rep. Edcel Lagman also said the first impeachment complaint, which is faced with a verification problem, was acted upon by the justice committee on Sept. 7.

This means the one-year ban on a second impeachment complaint against the same official had already taken place, Lagman said.

The 1987 Constitution bars holding impeachment proceedings against the same official more than once within a period of one year.

Majority leader Rodolfo Fariñas added that the motion was “improperly filed,” because it is addressed to the whole House of Representatives, and not to the justice committee.

The complainants led by former Negros Oriental Rep. Jacinto Paras filed a substitute impeachment complaint that corrected the verification form to reflect that they have personal knowledge on the allegations that are based on authentic documents.

The verification defect was the reason the second impeachment complaint against Chief Justice Maria Lourdes Sereno was dismissed for insufficiency of form.

In a press conference Tuesday, the wife said she has full trust on the justice committee that it would not let a technicality bring forth the truth.

Bautista faced an impeachment complaint for betrayal of public trust and culpable violations of the Constitution for not declaring his true wealth in his Statement of Assets and Liabilities Networth (SALN), as well as for alleged graft and corruption for allegedly receiving commissions from Divina Law Offices, the legal counsel of Venezuelan election technology supplier and Comelec’s biggest contractor Smartmatic.

Bautista also allegedly failed to urgently act on the hacking of the Comelec website, and also allegedly declined to assume control and supervision of the Task Force that was created to look into the data leak.

Lastly, Bautista allegedly obstructed justice when he downplayed that a “script tweak” in the 2016 election results was merely “cosmetic,” which practically cleared allegations of the camp of defeated vice presidential candidate Bongbong Marcos that the script tweak resulted in the victory of Vice President Leni Robredo. /idl