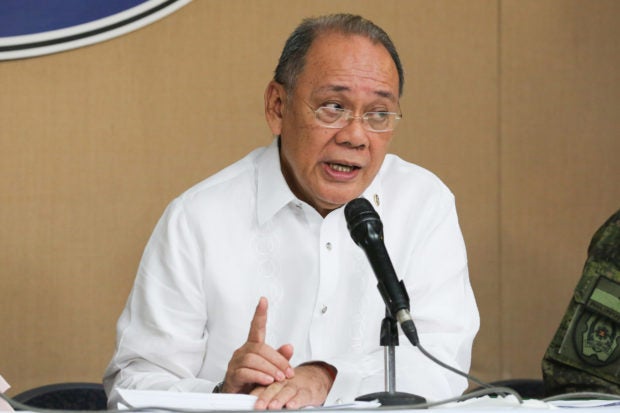 Presidential spokesperson Ernesto Abella on Wednesday said that President Rodrigo Duterte “has his own logic” and “game plan” when he admitted Tuesday night he invented the Singapore bank account he claimed was owned by Sen. Antonio Trillanes IV.

Abella, who is in the Senate to attend a  hearing on the proposed budget of the Presidential Communications Operations Office (PCOO) , said the President was “very transparent” and “not hiding anything and in fact put it in context” when he admitted making up the bank account number the latter had claimed to be owned by Trillanes.

Given the President’s own logic and style, Abella said it is important to understand the context the way the chief executive is saying things.

Abella issued this statement a day after Duterte admitted he “invented” the number of Trillanes’ supposed offshore bank accounts in Singapore.

“May kanya-kanya pong style (To each his own style). As we very well know the President is quite unorthodox and out of the box when he deals,” Abella said in a chance interview at the Senate.

“Ang pinag-uusapan po natin siguro yung context nung pagkakasabi niya (What we are talking about is the context of his statement), you need to see it as a whole as a way he’s presenting, not as we see things but as a whole, you need to see the larger picture,” he added.

Trillanes went to Singapore to check the bank accounts he allegedly had with the DBS Bank in its Alexandra branch but was told by bank officials no such bank accounts existed and that he was never its client.

“(The President) has his own internal logic. He has his own game plan in the way he did things….But I am sure he has his sources and I think we should credit him with that,” Abella told reporters.

When asked about the logic of the President in lying about Trillanes’ supposed bank accounts, Abella said: “That is the President’s logic.”

Duterte said on Tuesday night that the numbers he had earlier revealed was merely a “product of his mind.”

Abella said that the President was “transparent” in his actions by saying that he invented the accounts.

“But first and foremost he comes out in the open, he does not hide it right? In other words he’s quite transparent about his actions,” he explained.

The spokesperson also said Duterte’s actions were economically viable for the nation as the Philippines have been tagged as the “most financially inclusive” country in Asia.

Abella said he did not think Duterte’s latest statements would affect his credibility.

“His actions have so far have proven to be economically viable for the nation. For example we have been quoted as top financially inclusive country in Asia,” Abella explained.

“So other words, unorthodox as it may seem on the whole, apparently the impact of his actions tend to be economically viable,” he added. /jpv