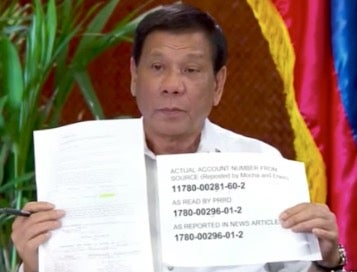 President Rodrigo Duterte on Tuesday night admitted he invented the number of the bank account that he had accused Sen. Antonio Trillanes IV of having in Singapore – which allegedly contained millions.

Duterte said the bank account number of Trillanes, which he earlier revealed, was merely a “product of his mind.”

On Tuesday, Trillanes went to DBS Bank Alexandra Road branch in in Singapore  and presented his Senate ID, passport, and a printout of the document being circulated on social media detailing his alleged DBS account with both account numbers – 178000296012 and 1178000281602.

The bank teller of DBS told Trillanes: “No such accounts exists.”

The President said Trillanes was so desperate that he had to go to Singapore.