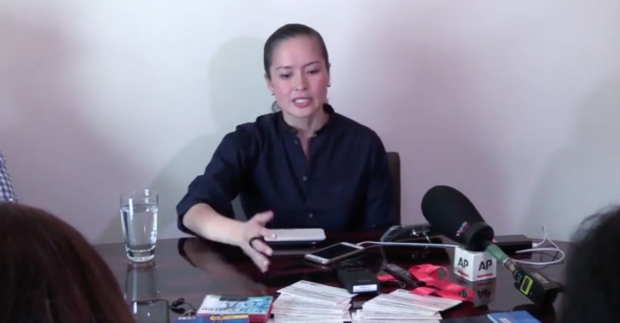 Patricia “Tish” Bautista on Tuesday said she has full faith in the justice committee of the House of Representatives, which will tackle the sufficiency in form and substance of the impeachment complaint against her husband Commission on Elections (Comelec) Chairperson Andres Bautista.

Bautista said she has full faith in the committee that it will find out the truth on her allegations of ill-gotten wealth against her husband.

This after the House justice committee chairperson Oriental Mindoro Rep. Reynaldo Umali said the panel would be consistent in dismissing impeachment complaints found to be insufficient in form.

The justice committee last week learned that the Bautista impeachment complaint was found defective because it failed to comply with the proper verification form that would indicate the private complainants’ personal knowledge on the allegations.

This defect was the reason the second impeachment complaint against Chief Justice Maria Lourdes Sereno was also found insufficient in form.

“I rely on the will and faith of all the congressmen to find out (what) the truth is. As much as you, I would like to know the truth as much as everybody with regard to these documents. I do have faith in the system. And so i will trust that,” Patricia said.

Asked if she wants her husband ousted, Patricia said it is up to the justice committee if it leads to the Comelec chairman’s impeachment.

She expressed hope that the committee would not allow attempts to subvert the impeachment proceedings.

The justice committee on Wednesday will tackle the impeachment complaint if it is sufficient in form and substance.

“Do I want him impeached? I think I want to know the truth. And if it leads to that, I will not make that judgement. Congress will make that. That’s where I stand on this. On my part, as a private citizen, I trust that everybody else will do the same,” Patricia said.

“This is now in the hands of the justice committee in Congress. My role as private citizen is to seek the truth and show the evidence. Let us allow the investigation to take its course unimpeded by any attempts to whitewash the truth,” she added.

Her lawyer Kapunan appealed to the lawmakers’ conscience not to allow the complaint to be dismissed based on mere technicality.

Kapunan said she was alarmed upon hearing Umali in an interview that the committee is inclined to dismiss the complaint for insufficiency in form.

Kapunan said Patricia will attend Wednesday’s justice committee hearing to attest to her personal knowledge on the affidavit attached to the impeachment complaint.

“We cannot dismiss it on a simple technicality. Because you, myself, Patricia, the congressmen, will never know the truth,” Kapunan lamented, adding should the impeachment complaint be dismissed tomorrow, Comelec chairman Bautista will be shielded from impeachment for at least a year.

The 1987 Constitution bars holding impeachment proceedings against the same official more than once within a period of one year.

“You’ll never know the truth about this unexplained wealth if it dies on round one,” Kapunan said.

Roque expressed hope the committee would admit the complainants’ amended impeachment complaint, which only corrected the defective verification complaint but contained the same allegations in the articles of impeachment.

Roque said the impeachment complaint, if it is dismissed tomorrow, may still be transmitted to the Senate if it gets one third support of all members of the House when it is approved in the plenary.

According to the Constitution, the House plenary may override a dismissed impeachment complaint in a vote of one third of all members of the House.

“I’m confident that my colleagues will not allow technicality to defeat the truth,” Roque said. /jpv

READ: Alvarez on impeachment complaints: We are just doing our job