Impeachment complaint vs Bautista filed after endorsement of 3 solons

An impeachment complaint was filed on Wednesday against the beleaguered Commission on Elections (Comelec) chairperson Andres Bautista for betrayal of public trust and culpable violation of the Constitution over allegations of ill-gotten wealth. 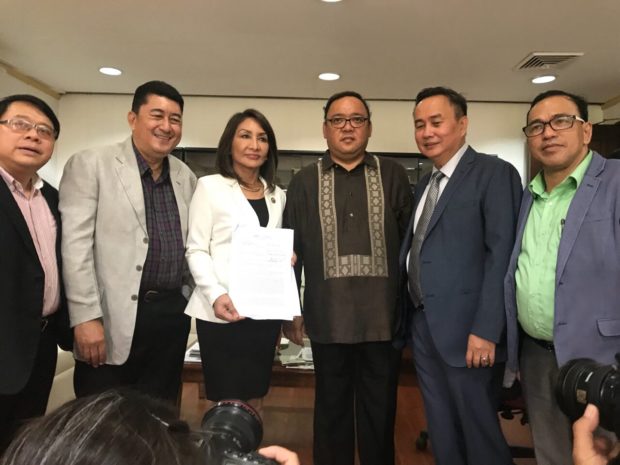 Former Negros Oriental Rep. Jacinto Paras pose for a picture with his lawyers Ferdinand Topacio and Manuelito Luna after filing the impeachment complaint against Comelec chair Andres Bautista. He is with the endorsers of the complaint, Deputy Speaker Gwen Garcia, Kabayan Rep. Harry Roque, and Cavite Rep. Abraham Tolentino. Photo from the office of Kabayan Rep. Harry Roque

Bautista faces increasing calls for him to resign amid a threat of impeachment after his estranged wife accused him of amassing P1 billion ill-gotten wealth. Meanwhile, Bautista has accused his Patricia wife of extorting him.

Bautista faced an impeachment complaint for betrayal of public trust and culpable violations of the Constitution for not declaring his true wealth in his Statement of Assets and Liabilities Networth (SALN), as well as for alleged graft and corruption for allegedly receiving commissions from Divina Law Offices, the legal counsel of Venezuelan election technology supplier and Comelec’s biggest contractor Smartmatic.

In an ambush interview after the filing, Roque said he agreed to endorse the impeachment complaint because he believes it complies with the requirement of the House leadership that the complainant has personal knowledge on the allegation.

Roque said the complaint is attached with an affidavit of Mrs. Bautista, thus complying with the personal knowledge requirement that was the standard in the dismissal of Magdalo Rep. Gary Alejano’s impeachment bid against President Rodrigo Duterte.

“I wouldn’t have endorsed it without the assurance of Mrs. Bautista that on the hearing, she will appear and attest to the truthfulness of affidavit, and bring all the documentary evidence she mentioned in her affidavit,” Roque said.

Garcia said she also decided to endorse the complaint to clear out all speculations since the wife presented to the media passbooks which purportedly showed Bautista’s undeclared wealth.

Garcia also said the allegations against Bautista cast doubt on the credibility of the recently concluded 2016 elections.

For his part, Paras said the grounds are betrayal of public trust and culpable violations of the Constitution for allegedly failing to disclose his networth in his SALN, as well as for possible graft and corruption in the receipt of referral fees from Smartmatic’s legal office.

Paras said the allegations may have stemmed from the marriage troubles between Mr. and Mrs. Bautista, but this may be considered a “blessing in disguise.”

“Whatever quarrels they have, at the end of the day, this is beyond domestic quarrel. (This is a) blessing in disguise. Because of that we were able to find out, na very mind-boggling ‘yung kaniyang pag-accumulate ng so much wealth,” Paras said.

“What is very fatal here is he admitted that he took money from Smartmatic through Divina Law office,” he added.

According to the impeachment complaint, Bautista betrayed the public trust when he failed to declare his foreign currency accounts, other bank accounts, two condominium units in Taguig city and California, and other foreign investments in his SALN, as alleged by Mrs. Bautista.

“It is crystal clear that Bautista illegally acquired these assets as they are disproportionate to his salary as a public official; besides, his non-reporting of the same in his SALN further lends credence to the allegations that they are ill-gotten,” the complaint read.

These allegations may be verified with the National Bureau of Investigation, the Anti-Money Laundering Council, Bureau of Internal Revenue, and other government offices the House of Representatives may summon in an impeachment proceeding, the complaint read.

The complaint also cited Bautista’s receipts of referral fees from Smartmatic through Divina Law Offfice, which is “tantamount to indirect bribery under the Revised Penal Code and constitutes a violation of Sec. 3(b) Republic Act 3019.”

Another ground for impeachment in the complaint is Bautista’s alleged neglect of duties and responsibilities in implementing the Data Privacy Act that could have prevented the data breach in the Comelec, an incident that came to be known as the “Comeleak.”

Bautista also allegedly failed to urgently act on the hacking of the Comelec website, and also allegedly declined to assume control and supervision of the Task Force that was created to look into the data leak.

“He need to be told that the hacking of the Comelec website before the 2016 national and local elections – wherein which the personal data of millions of voters were breached – was a serious privacy violation or personal data breach requiring swift and decisive actions. Had he acted with utmost urgency, the damage could have been minimized,” the complaint read.

Lastly, Bautista allegedly obstructed justice when he downplayed that a “script tweak” in the 2016 election results was merely “cosmetic,” which practically cleared allegations of the camp of defeated vice presidential candidate Bongbong Marcos that the script tweak resulted in the victory of Vice President Leni Robredo.

Marcos has filed an electoral poll protest against Robredo to contest the results of the 2016 elections.

“Bautista obstructed justice for saying that the script tweak was merely a cosmetic change which was in effect an exoneration of Smartmatic and Comelec IT specialists pending investigation,” the complaint read.

“Such action constitutes betrayal of public trust… Obviously, Bautista is unworthy and undeserving of the office of Chairman, Commission on Elections, and should be impeached. No less than six commissioners of the Commission had denounced his ‘failed leadership’ and other transgressions,” it added.

Bautista earned the ire of the House appropriations committee on Wednesday when he snubbed the briefing on the Comelec’s proposed 2018 budget supposedly to attend his children’s guidance counselling session. Comelec commissioner Rowena Guanzon has advised Bautista to take a leave of absence for the sake of the poll body. JE

Read Next
Beaten up after road rage incident, Davao cop shoots trike driver, brother
EDITORS' PICK
Percy Lapid’s kin: ‘We demand that his cowardly assassins be brought to justice’
Nothing’s certain so here’s how everyday Filipinos can make the most out of their Plan B
Do all the things you do, faster
PNP vows to bring justice for slain Percy Lapid; says probe underway
House energy committee chair Arroyo bats for cheap electricity
‘Seniority’ requirement despite vacant posts in DOH bothers senators
MOST READ
Student stabs teacher dead in Samar town
Trixie Angeles quits as press secretary due to health reasons
Not rehired?: Trixie Angeles not on list of reappointed Cabinet execs
Heart Evangelista to stay abroad ‘indefinitely’: ‘Hindi muna ako babalik’
Don't miss out on the latest news and information.