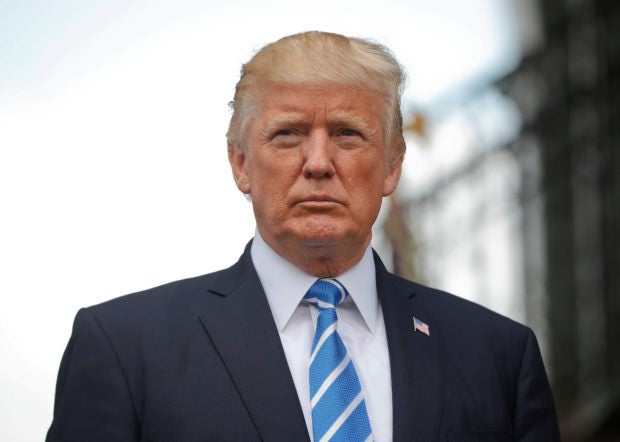 WASHINGTON—Donald Trump signed into law a Congressional resolution condemning white supremacists on Thursday, after lawmakers maneuvered the president into backing a text triggered by his equivocal response to racial violence in Charlottesville, Virginia.

Trump signed the resolution “rejecting White nationalists, White supremacists, the Ku Klux Klan, neo-Nazis, and other hate groups,” which was unanimously passed by Congress earlier in the week.

The overwhelming passage of the text meant that Trump would have likely had any attempted presidential veto overturned.

In a statement, Trump said he was “pleased to sign” the measure, adding that “as Americans, we condemn the recent violence in Charlottesville and oppose hatred, bigotry, and racism in all forms.”

Lawmakers from Virginia said Congress spoke with “a unified voice” to unequivocally condemn the August unrest, in which a rally by far-right extremists turned violent and a counter-demonstrator was killed when a car driven by a suspected white supremacist plowed into a crowd.

Trump was widely criticized for suggesting “both sides” shared blame for the violence between white supremacist groups and those opposed to them.

READ: Trump blames ‘many sides’ for violent clashes in Virginia

The president’s job approval ratings sank to one of the lowest levels of his turbulent seven-month presidency, as he was savaged — including within his own camp — over his handling of the fallout from Charlottesville.

Trump earlier on Thursday had revived his much-criticized suggestion of an equivalence between counter-protestors and those who killed Heather Heyer.

“I think especially in light of the advent of Antifa, if you look at what’s going on there, you know, you have some pretty bad dudes on the other side also,” Trump said, using a common name for anti-fascist groups which have sprung up in opposition to a resurgent white nationalist movement.

“I said, you got some very bad people on the other side also, which is true.”

Trump’s latest remarks sparked another round of controversy, amid a heated about the role of race in US politics.

Trump ran for the White House on a strongly anti-immigrant platform and before becoming president repeatedly and falsely questioned whether ex-president Barack Obama was born in the United States.

While overt racism is rare in most parts of the United States, a significant minority of Americans express racially-charged ideas.

A recent Reuters/Ipsos poll showed that 70 percent of Americans strongly agreed that people of different races should be “free to live wherever they choose” and that “all races are equal.”

But 31 percent of respondents “strongly or somewhat agreed” that the United States needs to “protect and preserve its White European heritage.”

“There are nearly 250 million adults in the United States, so even small percentages likely represent the beliefs of many millions of Americans,” said Larry Sabato of the University of Virginia Center for Politics.