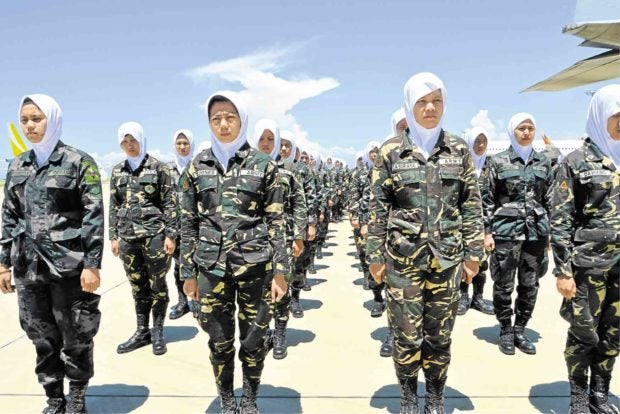 DIFFERENT BATTLE A contingent of policewomen and female soldiers will be deployed to evacuation centers in Iligan City and in other areas in the provinces of Lanao del Sur and Lanao del Norte to assist families displaced by the fighting in Marawi City. —DIVINA M. SUSON

Maia Macarambon, camp manager of the provincial evacuation center, said she was excited to work with the hijab-wearing female soldiers and police who were deployed here earlier this week.

The 102-strong all-woman company from the Armed Forces of the Philippines and the Philippine National Police will provide psychosocial services for the thousands of residents of Marawi City displaced by the fighting between government forces and Islamic State-inspired terrorists.

“It’s girl power. I have no qualms with the male troopers, but I expect that being women … they will understand more … the feelings of not only the children but also of the women in the evacuation center,” Macarambon said. She manages an evacuation center sheltering 200 families here.

“I know they can make a change in the lives of the evacuees, and will help the displaced [people] think that despite the war, it is not the end yet. I hope they can give them ideas that there is still life after the war,” she said.

Macarambon said the deployment of the all-woman civil relations company was a good gesture for the mostly Muslim evacuees.

“I love it. It’s good that they respect our culture. Despite of what is happening, the government still respects us,” she said.

“Almost all the Maranaos were hurt when our city was bombed, and most of them think that President Duterte is angry [with] us,” she said.

“At least now … we know that the government still cares for us and respects us,” she added.

Read Next
Duterte frowns on idea of reforming criminals
EDITORS' PICK
What to watch out for when selecting a video surveillance solution
Heads may roll at BOC, says Palace if sugar smugglers are allowed to use recycled import permits
vivo brings to the Philippines a powerful smartphone with a slimmer body, the vivo Y02s for only PHP 6,499
Palace: Biggest supermarkets in PH commit to sell sugar at P70 per kilo
DOH reports increase in daily COVID-19 deaths, mostly unvaxxed
House energy committee chair Arroyo bats for cheap electricity
MOST READ
DepEd to give teachers P5K cash allowance within first week of classes
Alyssa Valdez to miss Creamline’s AVC Cup campaign
Jordan Clarkson arrives in Manila to bolster Gilas Pilipinas
NIA welcomes former DENR exec as its full-fledged administrator
Don't miss out on the latest news and information.