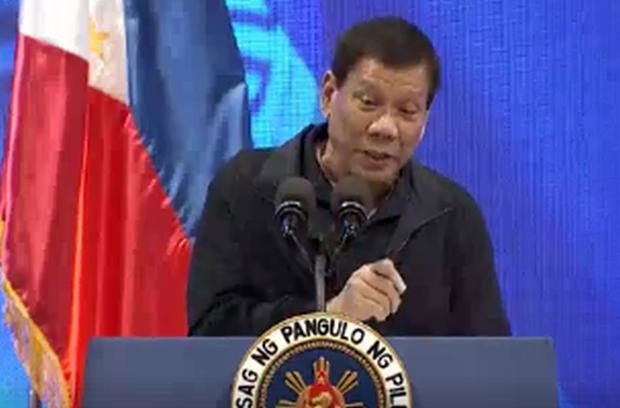 President Rodrigo Duterte speaks at the 23rd anniversary celebration of Tesda in Taguig on Wednesday, Aug. 30, 2017.

President Duterte has derided the idea of reforming criminals, saying France and other members of the European Union misunderstand the Philippines, where the penal code, unlike in Western countries, was based on “retribution.”

According to Mr. Duterte, former convicts tend to return to jail and also become homosexuals while in prison.

Mr. Duterte shared his views as he once more dealt with criticism from human rights defenders, including the United Nations special rapporteur on extrajudicial executions, Agnes Callamard, about alleged extrajudicial killings in his war on drugs.

The President said he threw curses at Callamard because she called on him to put a stop to the killings.

The Philippines, he said, is not a village of France and that the two countries have different penal systems.

“Do not talk as if you are imposing the rules which you think is applicable for all,” Mr. Duterte said in a speech at the 23rd anniversary of the Technical Education and Skills Development Authority on Wednesday evening.

According to him, the Philippines’ Revised Penal Code is based on the code that the country inherited from its Spanish colonizers and was basically about “retribution.”

“An eye for an eye and a tooth for a tooth. That’s the basic law of a jungle,” he said.

But countries like the United States and Canada have a “positivist theory” that criminals can be rehabilitated, Mr. Duterte said.

This has not been effective, he said.

“You can make a useful human being out of him when he goes out of prison, which has really been debunked as negative,” he said.

‘The psychology of it’

Experience, Mr. Duterte said, has shown that many ex-convicts return to their old ways.

“I will tell you the psychology of it, of a prison. It’s the same in America. If they get used to six, seven, 10 years, 15, 20 years they are in prison, no matter what form of livelihood you teach them in Tesda, once they are out, they will look for some trouble. And then they will return to Muntinlupa and they will be happy,” he said.

“They do not want out of prison because they have lost the existence, the essence or existence of a productive person,” he added.

Former convicts would just return to robbing people, drinking and gambling, and would then agree to be jailed again, he  said.

Moreover, Mr. Duterte went on, they lose their “gender identity” and have relations with members of the same sex in prison.

“Because they’ve been there for so long, they go with each other. Even the women in the correctional [the prison for female convicts]. To a point that they would have acquired latent homosexuality,” he said, adding that they later “develop aberration of the mind.”

Mr. Duterte said that in his nine years as a prosecutor, he had seen inmates balking at leaving prison because they would lose the free food and they had taken lovers there.

“They are already monster in the sense that they are incapable of… if ever, they will enter into masochism, hurt women, things like that,” he said.

“That is why many return to prison. Look for a neighbor who is an ex-convict, see if you can find one,” he added.