Uber back on the road once it pays P190-M fine 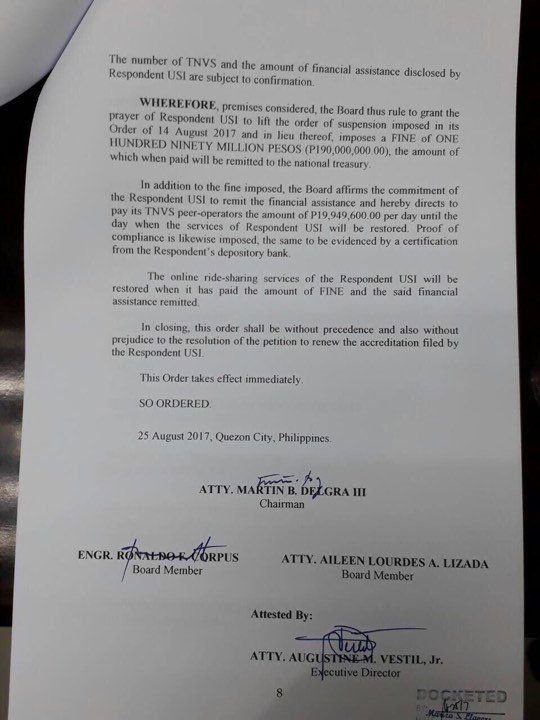 The Land Transportation Franchising and Regulatory Board (LTFRB) has granted on Friday Uber’s petition to cut short its one-month suspension in exchange of a fine, which the agency pegged at P190 million.

In its order released to the media Friday night, the LTFRB said that the fine on Uber was “commensurate to the penalty of suspension it has earlier imposed” against the transport network company (TNC).

Last Aug. 14, The LTFRB ordered Uber suspended for a month after it defied its order not to accept and activate new drivers into its platform as the agency sorted out issues concerning the ride-sharing industry, such as accountability and pricing mechanisms.

Uber appealed the order last week by proposing that it instead pay up a P10-million fine. The LTFRB, however, set the fine at P190 million as it noted that based on data they got from Uber, the TNC earns around P7 million to P10 million.

“[The P190-million fine] is arrived at by taking into consideration the number of days that respondent should be suspended in relation to the daily average income,” the order read.

Till Uber pays its fine to the government, the LTFRB said that the TNC should continue to provide financial assistance to its 36,367 affected drivers, amounting to more than P19.9 million daily.

Operations of the TNC can immediately resume once it has settled the fine, which would be remitted to the national treasury.