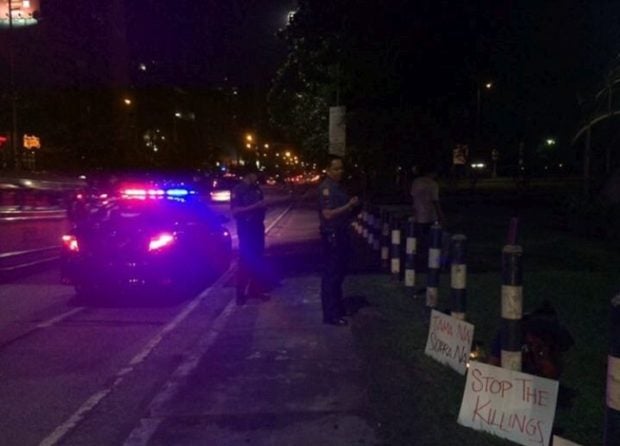 Quezon City police officers went to the rally site on Katipunan Avenue as part of “standard operating procedure,” not to intimidate the protesters. PHOTO/The Guidon

Chief Supt. Guillermo Eleazar said the officers went to the rally site on Katipunan Avenue as part of “standard operating procedure,” not to intimidate the protesters.

The Ateneo publication The Guidon reported online that while the rally was ongoing at Gate 2.5, a black police cruiser with no license plate but with  body number “QCPD-237” approached the gathering around 8:30 p.m.

Two policemen got off the car and reportedly asked about the purpose of the rally and the names of its leaders.

The encounter was later denounced on social media as a form of police harassment.

But in an interview, Eleazar explained: “It is merely part of our monitoring, to ask who they were, who their leaders were. It was not for intimidation but for their protection and their security.”

As to the police car having no license plate, he said it was one of the 50 new vehicles turned over to the QCPD just recently.