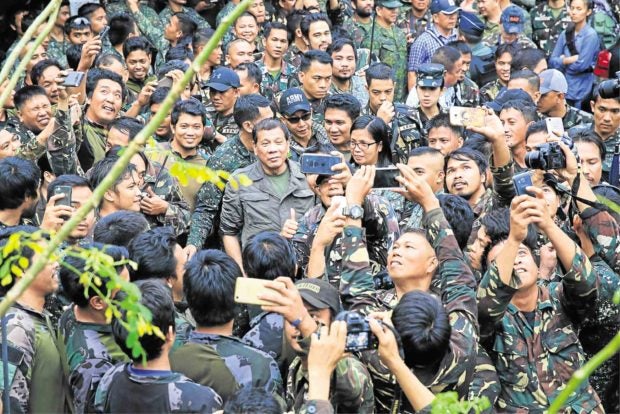 President Duterte (center) gamely poses for “groufies” with soldiers during his second visit to Marawi on Friday. —MALACAÑANG PHOTO

“The deployment of troops to Marawi and other points in Mindanao needs to be re-balanced to ensure maximum effectiveness,” Abella said in a statement.

“The President said he would like to upgrade Armed Forces in terms of capabilities and personnel and I think those reforms are necessary,” Angara told reporters in an interview.

Meanwhile, Drilon said that it was Defense Secretary Delfin Lorenzana who requested for “additional manpower” of “about 20,000 soldiers.”

According to Senator Panfilo Lacson, the Senate can help the government respond to terror threats through a legislation that would increase the troop ceiling of the Armed Forces of the Philippines (AFP) and the Philippine National Police (PNP).

“In terms of legislation, we can help by probably fast-tracking legislation maybe in the budget to increase the troop ceiling. We’re talking here of something like 20,000 more troops for the AFP and around 10,000 for the PNP. Mga bata (Young officers),” Lacson told reporters on Wednesday.

Read Next
Engineer’s death won’t absolve subordinates in Malampaya scam
EDITORS' PICK
Being a celebrity isn’t wholly an ‘advantage’ in the election, says Sotto
Acer starts the year off strong with the Aspire Vero National Geographic Edition
Octogenarian jailed for ‘stealing mangoes’ freed after people chip in for bail
Gov’t eyeing COVID-19 tests in pharmacies
Gear up and get ready to play with Yamaha Mio Gear
Over 3 Million worth of prizes to be won at Smart Padala’s SENDali Manalo Promo!
MOST READ
Imelda Marcos trends on Twitter after octogenarian jailed for allegedly stealing mangoes
Natural immunity more potent than vaccines during US Delta wave—study
Help pours in for octogenarian jailed for ‘stealing’ mangoes in Pangasinan
Bongbong Marcos-Sara Duterte tandem adds Zubiri, Gadon, Marcoleta to Senate slate
Don't miss out on the latest news and information.