Senate to craft law for deployment of 20k soldiers, 10k cops in Mindanao 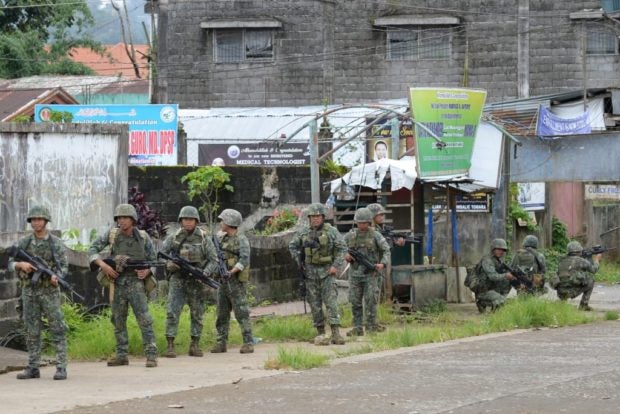 This photo taken on July 22, 2017 shows Philippine Marines patrolling a deserted street at the frontline in Marawi on the southern island of Mindanao, as fighting between government troops and Islamist militants enters its second month. / AFP PHOTO / TED ALJIBE

The Senate can help the government respond to terror threats in Mindanao by crafting a legislation that would increase the troop ceiling of the Armed Forces of the Philippines (AFP) and the Philippine National Police (PNP).

“In terms of legislation, we can help by probably fast-tracking legislation maybe in the budget to increase the troop ceiling. We’re talking here of something like 20,000 more troops for the AFP and around 10,000 for the PNP. Mga bata (Young officers),” Senator Panfilo Lacson told reporters on Wednesday.

This after President Duterte hastily called for a meeting with Senate and House leaders at Malacañang to discuss the renewed threats from Islamic State of Iraq and Syria (ISIS) to attack at least three areas in Mindanao.

Duterte also told the lawmakers that Defense Secretary Delfin Lorenzana and martial law administrator is requesting for an additional deployment of troops in Mindanao.

Last May 23, President Duterte placed the whole of Mindanao under martial law after members of the ISIS-backed Maute terror group besieged the city after the government troops attempted to arrest its leader Isnilon Hapilon.

More than 100 soldiers and policemen have died from the clashes.

Lacson, former chief of the PNP, said they can include in the budget a special allocation for the sending of additional troops in the conflict-torn region.

He said battle-weary troops in Marawi City, where members of the Maute group are launching attacks, needed to be replenished by a new batch of forces.

The deployment of new forces, however, will be costly for the government, Lacson pointed out.

But Lacson said he believes the AFP and the PNP can device a crash program to hasten the training for additional troops.