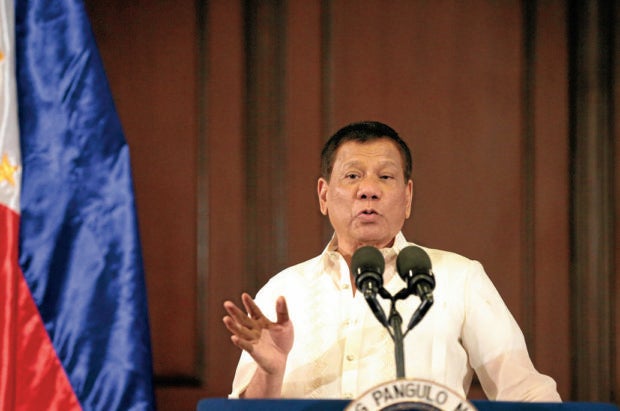 President Rodrigo Duterte spoke of threats from the Islamic State of Iraq and Syria (ISIS) to attack certain provinces in Mindanao when he met with Senate and House leaders on Tuesday.

Senate Minority Leader Franklin Drilon made this disclosure on Wednesday when asked what Duterte discussed with them during the meeting at Malacañang the President hastily called.

Aside from the Maute group, Drilon said the President specifically identified the ISIS behind the terror threats in the region.

“He briefed us on intelligence information of new threats posed by the ISIS in the south and he is looking for a closer regional cooperation in the neighboring countries, particularly Indonesia,” Drilon said in an ambush interview.

Asked how serious the threat was, Drilon said: “In the President’s briefing, it appears to be serious. That’s what he said.”

“He informed us of that renewed threat because the secretary of national defense has requested for additional manpower, and, therefore, that would require budgetary allocation,” Drilon added.

The senators also said Defense Secretary Delfin Lorenzana was requesting additional 20,000 soldiers to be deployed to the conflict-torn Marawi City from the President.

On May 23, Duterte placed the whole of Mindanao under martial law after members of the ISIS-backed Maute terror group attacked the city after government troops attempted to arrest its leader Isnilon Hapilon. IDL

Read Next
Parojinogs tried to bribe me with ‘a sack of P100 bills’ – Espenido
EDITORS' PICK
Luxe property: A way to build, preserve wealth
House energy committee chair Arroyo bats for cheap electricity
OVP: Pilot’s claim vs Robredo ‘never happened’, a ‘malicious fabrication’
Honolulu Café is the cure for your Egg Tarts and Roastings cravings
Petition to reverse Comelec decision on Bongbong Marcos’ DQ case reaches SC
PH detects local transmission of Omicron subvariant BA.2.12.1
MOST READ
Heart Evangelista gets a ‘no’ from Chiz Escudero after asking, ‘Do I deserve a bag?’
CebuPac places pilot under disciplinary review after ‘baseless’ post vs Robredo
PH logs 110 new COVID-19 cases; active down to 2,487
OVP: Pilot’s claim vs Robredo ‘never happened’, a ‘malicious fabrication’
Don't miss out on the latest news and information.