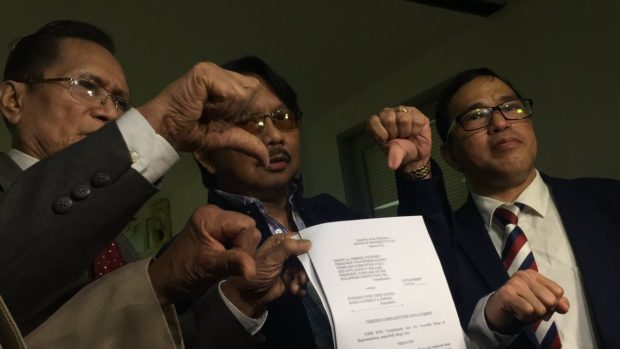 The group seeking the ouster of Chief Justice Maria Lourdes Sereno on Friday asked the Supreme Court (SC) certified copies of at least seven documents to boost their impeachment complaint.
In a two-page letter, the Volunteers Against Crime and Corruption (VACC) and the Vanguard of the Philippine Constitution Inc. (VPCI) said the documents will prove the allegations in their complaint filed last Wednesday.

The request will test Sereno’s clout among her colleagues as the request, whether to deny or not, should be decided collegially.

Among the documents requested by the two groups is the Memorandum of Associate Justice Teresita Leonardo-De Castro questioning Sereno’s orders, which lacked necessary approval of the collegial Court as provided under the rules, including the appointment of a Philippine Judicial Academy (Philja) official and provision for travel allowances of her staff.

The same memo from Justice De Castro also assailed Sereno’s grant of foreign travel allowance to members of her staff without required approval from the full Court.

De Castro also questioned the “long delay” in filling up key positions in SC pending before Sereno’s office, “which is prejudicial to the best interest of service.”

The VACC and VPCI also sought the SC records involving the SC’s revocation of Sereno’s order in 2012 to reopen a regional constitutional administrative office (RCAO) in Cebu without the collegial approval of the Court.

They likewise asked for Sereno’s memorandum for appointment of lawyer Solomon Lumba as her staff head and the subsequent letter of Senior Associate Justice Antonio Carpio withdrawing his signature in the said appointment over an internal issue.

The groups asked the SC to provide them copies of the documents pertinent to these issues against Sereno after no lawmaker came forward for the needed endorsement.

An impeachment complaint needs to get an endorsement of a sitting congressman before it could be referred to the House committee on justice for hearing. JPV