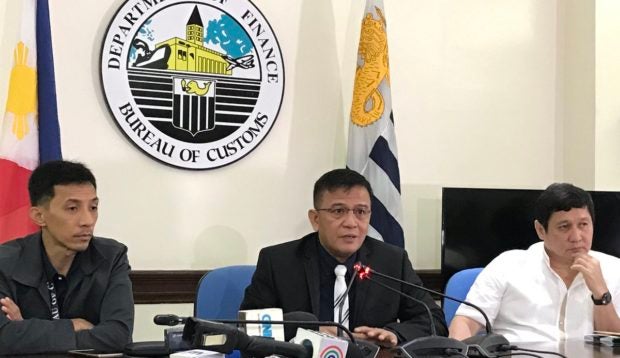 Almost 30 active and retired basketball and volleyball players like Kenneth Duremdes, Marlou Aquino and Alyssa Valdez were hired as “technical assistants” of the Bureau of Customs (BOC) in 2016 though their only function was to coach or play for the agency’s teams in sports cups.

Customs officials had placed the athletes under departments like the Office of the Commissioner or the Intelligence Group purportedly to skirt government audit rules, lawmakers investigating irregularities in the BOC learned on Wednesday evening.

This was so the players’ employment would not be considered “COA-ble,” or so they need not be restricted under the rules of the Commission on Audit (COA), Customs Commissioner Nicanor Faeldon told the hearing of the House ways and means committee.

Faeldon confirmed the appointments of the players as technical assistants, but defended the agency’s action. He said he had consulted lawyers about the legality of the appointments but “no one told me it was illegal.”

Some of the athletes remain on the payroll of the BOC, while others have left, customs officials told the House panel.

House Deputy Speaker and Batangas Rep. Raneo Abu, who confronted the BOC officials about the hiring of the sports personalities, said there was nothing wrong with employing athletes to customs positions—if they were qualified.

But if they were hired by the agency for the sole purpose of playing sports, that might be an issue of misuse of government funds, Abu told reporters Thursday.

“We have already asked the BOC to show us the 201 files of the players,” the congressman said.

Abu said there seemed to be a disconnect between the hiring of players in the bureau and Faeldon’s earlier pronouncement that the BOC had strict rules for their employment process when he called out cases of influence-peddling by members of Congress in the agency.

Last week, Faeldon’s chief of staff Mandy Anderson accused Speaker Pantaleon Alvarez of bullying her to force the promotion of an unqualified customs officer, which the latter denied.

Then on Wednesday, Faeldon lashed out at lawmakers and other government officials supposedly for trying to influence promotions and assignments at the BOC.

Quirino Rep. Dakila Cua, chair of the House ways and means panel, said he was hurt by Faeldon’s allegations.

“These [basketball and volleyball] players were not endorsed by congressmen but were ‘self-hired’ and they’re still there,” he said.

During the hearing, which lasted until past 11 p.m., Abu asked the Customs officials to confirm the authenticity of a document bearing the names of players hired by the BOC.

The customs special order dated Sept. 27, 2016 lists down 28 basketball and volleyball players. Signed by Faeldon, the document authorizes Anderson to sign the daily time record of the “Customs personnel.”

Seven of the athletes, including Duremdes and Valdez, were placed under the Office of the Commissioner, while 19 others were under the Intelligence Group. One player was put in the Assessment and Operations Coordinating Group.

In October 2016, Duremdes coached the “BOC Transformers” in the charity basketball league UNTV Cup, which was participated in by teams from other government agencies. The customs team’s beneficiary was Caritas Manila Inc.

Cua said the issue of the athletes’ employment should not take away from the bigger issue of P6.4 billion worth of illegal drugs entering the country through the green lane of the BOC.

He said the five crates clandestinely carrying kilos of shabu (methamphetamines) seized by the BOC recently were part of a larger consignment of 23 packages. “They only [seized] five so where are the other 18?”

“That’s potentially tantamount to more than two tons of shabu in the market. There could be that much shabu circulating in the market worth P22.5 billion. I want to focus on that,” Cua said. JPV

Faeldon in fighting form vs foes: ‘Shame on you’