Why don’t you go with us? Mike Arroyo dares President Aquino 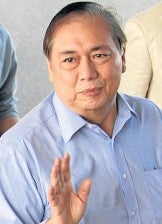 Jose Miguel “Mike” Arroyo has challenged President Aquino to go with him and his wife, former President Gloria Macapagal-Arroyo, so they could prove that they had no intention of eluding justice by seeking medical treatment abroad for the latter’s degenerative bone disease.

In an exclusive interview with the Inquirer on Wednesday night, Arroyo said the Aquino administration was “persecuting, harassing and oppressing” members of his family.

“If he wants, the President can just come with us. Then, after [my wife’s medical procedure abroad], we can all return home,” he said in a mild voice.

Arroyo said the President’s apprehension over the real intent of their trip overseas “has no basis.”

“Why should he suspect that we’re not coming back? Our grandchildren are here. Gloria is an incumbent lawmaker of Pampanga. We’ve traveled outside the country and returned home,” Arroyo said.

“What this government is doing to us is really deplorable. We’re being persecuted, harassed and oppressed. It’s all rolled into one,” he said.

Arroyo said “this never happened during our administration.”

“But this guy, he’s the one who’s directing what should be done to us. He wants the cases filed against us railroaded,” Arroyo said in reference to Mr. Aquino.

Arroyo said his wife had become “depressed” over how the Aquino administration had been treating their family.

He said that while trying to put up a brave front, his wife was hurt by the accusations that had also affected their grandchildren.

“My granddaughter was slapped by her classmate who told her that her grandparents were corrupt. It’s really unfortunate how we have been convicted by public opinion,” he said. “What happened to the presumption of innocence?”

Reminded of the President’s offer to fly in a foreign specialist to treat his wife, Arroyo said the central issue that the government should address was their constitutional right to travel and her right to choose her own doctor.

He said Mr. Aquino’s announcement that the government was willing to foot the bill for his wife’s medical needs was just a bait “to further hold” her.

“I think they just want to further hold Gloria [so they can buy time] before filing the case against her. The President has said that she has to be arraigned here first,” he said.

Arroyo also assailed the President for openly directing the joint panel of the Department of Justice and Commission on Elections to move for his wife’s immediate arraignment for the electoral sabotage case filed against her in connection with the alleged rigging of the 2007 midterm elections in Mindanao.

He said that by issuing such an order, Mr. Aquino had virtually pronounced his wife guilty without benefit of a fair trial.

“He’s ordering the joint panel to make sure she’s guilty. But before she can be charged, there should be a finding of probable cause first,” Arroyo said, adding:

“If the government officials really want to pay for Gloria’s hospitalization, then they should pay for her medical expenses abroad.”

Despite the assurance of the Philippine Medical Association (PMA) that his wife can be treated locally, Arroyo insisted that there were no available medical facilities and “expert pathologists” who could treat her bone ailment.

Besides, he said, the PMA officials had admitted that his wife had the right to choose her own doctor.

“Even the officials of St. Luke’s [Medical Center] told us that no pathologist can do [a bone biopsy],” he said.

Arroyo said he doubted that a foreign specialist would agree to stay in the country “for only four days” just to check on his wife’s condition.

Quoting his wife’s doctors, he said: “For anybody to have that biopsy, you have to be prepared by the hospital, and the process takes around one month.”

Arroyo scoffed at critics who accused his wife of faking illness.

“How can that be? The woman is really sick. You’ve seen the pictures, how she was before with that halo vest,” he said, adding that his wife also had to wear a minerva vest.

“She’s not making it up. She’s really sick. She has undergone three operations. Her doctors had even prepared her medical abstract,” he said.

While his wife has been recovering, she “needs a biopsy for her mineral bone deficiency, and that biopsy can only be done abroad,” Arroyo said.

“It’s not true that they can do it here… In Europe, [the medical facilities] are far advanced,” he said.

Asked if his family was harboring resentment toward the President, Arroyo said: “We’re not angry at him. We’re just all wondering why there is so much oppression against us, so much persecution.

“We never did anything wrong to the Aquinos. That’s why we’re surprised that he’s doing this to us.”