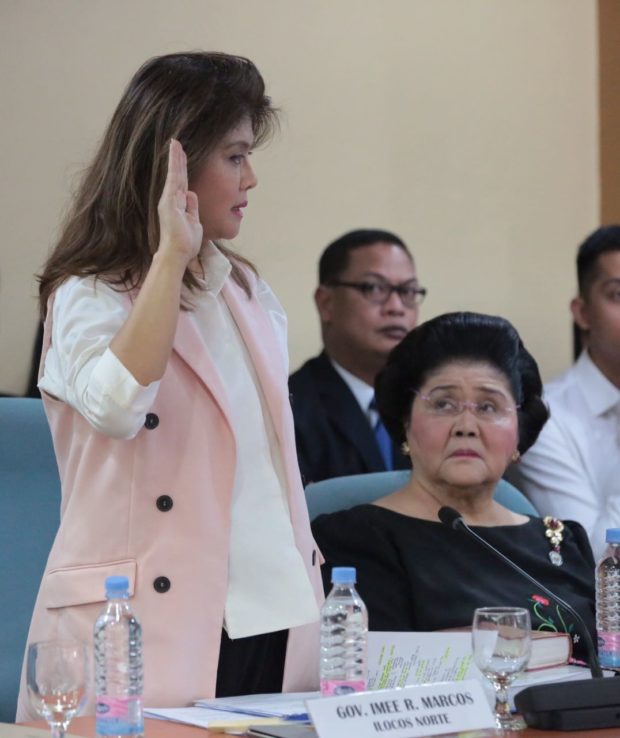 Gov. Imee Marcos takes her oath during a hearing at the House of Representatives on the tobacco excise tax while her mother representative Imelda Marcos looks on. INQUIRER / Grig C. Montegrande

Enrile earlier told reporters he would help Marcos to answer the allegations. Enrile as then the defense minister was a key figure in toppling the dictatorship of former President Ferdinand Marcos during the 1986 people power revolt.

In his opening speech, Enrile said he would give free legal assistance to Marcos, who even brought a copy of the 1987 Constitution to remind herself of her constitutional rights.

Enrile said he would help Marcos in deference to her father, the former president “whom I had served in previous capacities in government.”

In her opening statement, Marcos denied any anomaly in the overprice in the minitrucks and minivans using the provincial government’s tobacco funds.

During the hearing, lawmakers grilled Marcos about the alleged anomalous use of the tobacco funds through cash advances, which were made even before the conduct of a proper bidding.

Marcos said she does not remember all the details of the transactions, saying instead that she relied on the advice of the Bids and Awards Committee to resort to direct contracting.

“Umaasa ako sa professional na kakayahan ng aking tao (I depend on the professional expertise of my employees),” she said.

Marcos even cited the call of President Rodrigo Duterte in his second State of the Nation Address (Sona) to amend the procurement law to ease the public bidding rule.

When Surigao Del Sur Rep. Johnny Pimentel said the barangay (village) captains who received the vehicles were not even farmers, Marcos said Ilocos Norte is a largely agricultural province where barangay captains are also farmers.

Oriental Mindoro Rep. Doy Leachon slammed Marcos for violating the procurement law for releasing the cash advances even before the conduct of a proper public bidding.

“There is admission before this committee that it was done in undue haste, in violation of the procurement law,” Leachon said.

“I made no admission of such undue haste,” Marcos replied.

Marcos was also scored by lawmakers for resorting to cash advances, which is prohibited by the Commission on Audit.

Marcos defended the cash advances by citing the urgent need of farmers for the tobacco funds, denying that she received a COA observation which she did not sign that reported the anomalous use of cash advances.

To which Leachon said: “Ignorance of the law excuses no one from compliance therewith.”

The Marcoses attended the hearing as the lower house threatened to detain the governor for contempt if she continued to snub the hearing.

This after the lower house ordered six provincial government officials – who came to be known as the Ilocos Six – detained for contempt for refusing to answer questions during  previous hearings.

The six officials were later ordered released after 57 days in detention after participating in Tuesday’s hearing.

It was majority leader llocos Norte Rep. Rudy Fariñas who called for a House probe on the tobacco funds anomaly, in what is perceived to be a political show of force setting the stage for the 2019 elections in Ilocos Norte, where the Fariñas and Marcos clans are asserting dominance.

In calling for the probe, Fariñas alleged that about P66.45 million tobacco funds were used to purchase minicabs, buses and minitrucks for the different Ilocos Norte municipalities, even though the law—Republic Act 7171—that imposed the tax on Virginia cigarettes states that the excise tax should be used for livelihood projects and infrastructure projects benefitting the tobacco farmers. IDL/rga

Read Next
Pimentel: Dissolution of marriage ‘divorce’ by another name?
LATEST STORIES
Beggar dead in Quezon hit-and-run incident
Prince Harry: ‘No other option’ but to cut royal ties
‘It’s not my shame’: Why Filipino women are calling out sexual misconduct on social media
‘1917’ takes top honor at the Producers Guild Awards
Duterte promises to look for funds to establish rail transport in Cebu
MOST READ
Panelo: Duterte only wants to emulate strong political will of Marcos
Marcos monument beside Aquino’s stirs Tarlac town
Palace: Crisis over ABC-CBN franchise unlikely
Taal Volcano evacuees warned against going home
Don't miss out on the latest news and information.