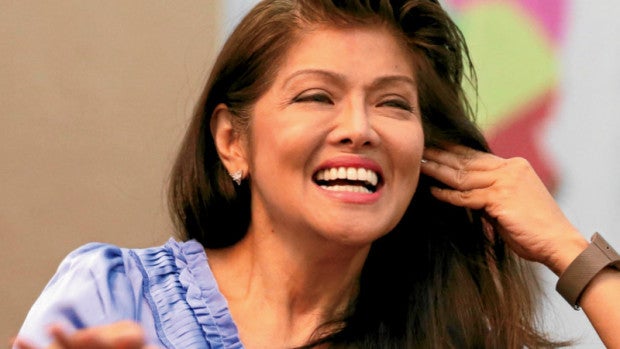 Majority leader Rudy Fariñas on Thursday broke his silence and invited his political rival Ilocos Norte governor Imee Marcos for a face-off to answer the allegations involving the allegedly anomalous use of the provincial government’s P66.45 million tobacco funds.

In a message to House of Representatives reporters, Fariñas said he would answer Marcos’ accusations in a separate press conference.

Marcos faced the media Thursday and sought the Supreme Court’s intervention on the threats of Fariñas and other House leaders to continue to detain the six Ilocos Norte provincial government officials, who were held in contempt for refusing to answer questions in the House probe.

“I will answer the statements of Gov. Marcos in my counter press conference, and I am inviting her to join such in any network of her choice,” Fariñas said.

In that press conference, Marcos likened the detention of her employees in the House as a “hostage crisis.”

But Fariñas said what was apparent is that Marcos was only afraid to appear before the House and put under oath her denial that the tobacco funds were misspent on minitrucks instead of benefiting the tobacco farmers.

“Initially, if what she is saying are true, why is she afraid to appear and state them under oath in the House inquiry?” Fariñas said.

Fariñas accused Marcos of ordering her employees “not to remember” the transactions involving the tobacco funds.

“Gov. Marcos claims that the use of cash advances for the purchase of the 115 vehicles is legal , but her six subordinates refuse to answer the simple question if cash advances were resorted to in these transactions,” Fariñas said.

Fariñas said it was “incomprehensible” the six provincial government officials – who came to be known as the Ilocos Six – chose to be held in contempt and to be detained even if they claimed the transactions were legal.

“It’s incomprehensible that they have chosen to be held in contempt and be detained for their refusal to answer questions about these cash advances. They claim that the transactions are legal but refuse to talk about them unless they are shown the original documents that have mysteriously disappeared in the Capitol,” Fariñas said.
Fariñas said the  Ilocos Six was only afraid of spilling the beans on who actually received the P66.45 million tobacco funds.

“Are they all afraid to be eventually asked and reveal who actually received and kept the P66.45M in cash?” Fariñas said.

Fariñas said it was Marcos who personally requested the purchase of the 70 Foton minitrucks, and it was also she who approved her own request, including the bidding and the disbursement voucher.

It was Marcos who also signed the check for the P32.6-million purchase of the 70 Foton minitrucks, Fariñas said.

Fariñas alleged the purchased Foton minitrucks were not delivered to the province, which means these were ghost deliveries.

“But there was not a single Foton Mini Truck delivered to the Province of Ilocos Norte. This is a clear falsification of public documents and ghost delivery of 70 Foton Mini Trucks,” Fariñas said.

It was Fariñas who called for a House probe on the tobacco funds anomaly, in what is perceived to be a political show of force setting the stage for the 2019 elections in Ilocos Norte, where the Fariñas and Marcos clans are asserting dominance.

In calling for the probe, Fariñas alleged that about P66.45 million tobacco funds were used to purchase minicabs, buses and minitrucks for the different Ilocos Norte municipalities, even though the law—Republic Act 7171—that imposed the tax on Virginia cigarettes states that the excise tax should be used for livelihood projects and infrastructure projects benefitting the tobacco farmers.

In a separate statement, Oriental Mindoro Rep. Doy Leachon slammed Marcos for snubbing the House probe and taking up to the media her predicament.

“Perhaps Gov. Imee prefers to speak in press conferences because it’s a one-way street; in Congress, she can be asked questions, issues can be further explored. Baka dito sya kinakabahan,” Leachon said on Thursday.

Leachon said Marcos has not taken responsibility of her actions for continuing to dodge the House inquiry into the alleged fund anomaly.

The congressman also slammed Marcos for disrespecting the House as an institution.

“If she loves the institution as she said, then she should accord it the respect it deserves. As a former legislator, she should recognize the mandate of Congress and should appreciate its power to call on individuals who can provide information it needs for investigations in aid of legislation,” Leachon said.