“I am heartened by the statement of President Duterte. It shows his care for the people is genuine,” Lopez said in a text message to Inquirer.net.

Lopez, whose appointment as head of the Department of Environment and Natural Resources was rejected by the Commission on Appointments, said despite Duterte being surrounded by mining interests, he remained true to his duty.

“He is surrounded by mining interests – but his duty to country is paramount. Should he decide to close down any mine – from day one if the plan is followed all will have jobs,” the known environmental advocate said. 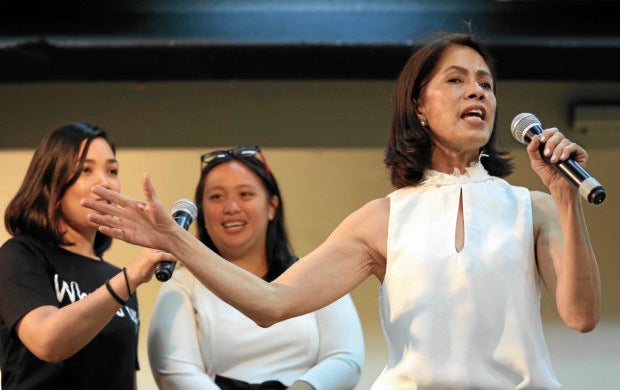 The Chief Executive, in his second Sona on Monday, said the protection of the environment must be a priority, telling mining companies to practice responsible and sustainable mining.

“The protection of the environment must be made a priority ahead of mining and all other activities that adversely affect one way or another. And this policy is non-negotiable,” Duterte, who appointed Lopez as environment secretary, said.

“I sternly warn all mining operations and contractors to refrain from the unbridled and irresponsible destruction of our watersheds, forests, and aquatic resources. You have gained much from mining, we only get about 70 billion (pesos) a year, but you have considerably neglected your responsibility to protect and preserve (the) environment for posterity,” he added.

Lopez, meanwhile, maintained her willingness to help rehabilitate the environment in which farmers will benefit from.

“A green economy will happen. I can help significantly with marketing,” she said. “While illegal mining is not good – it is the large-scale miners that are causing large-scale suffering to the people.”

The President will also hold all mining companies and its officials “responsible for the full and quick clean-up, restoration (and) rehabilitation of all areas damaged by mining activities, and the extension of all necessary support to the communities that have suffered mining’s disastrous effects on their health, livelihood, and environment, among others.”

Duterte mentioned Lopez during his Sona and also commended broadcast journalist Ted Failon’s exposé on the damage done by mining to the environment.

“Ngayon makita mo naman, not only Gina Lopez gave you a clear picture of what was happening horrendously. Nakita mo kay Ted Failon – ’yung kay Ted Failon, talagang nanood ako, dalawang beses. And I realized that I have to do something about it as a Filipino…” said Duterte. “I salute him for coming (out) with it.”

Duterte also warned that mining companies should either spend to restore the virginity of their source or he would “tax you to death.”

“Finally, let me make this appeal to those directly engaged in mining. Declare your correct income. Pay your correct taxes. Believe me, your failure to do so will be your undoing and eventual ruin,” he said.

Lopez, referring to Duterte’s support of her advocacy, said, “He is the President with the guts and the heart to implement the law. God bless him many times over.” CBB/rga