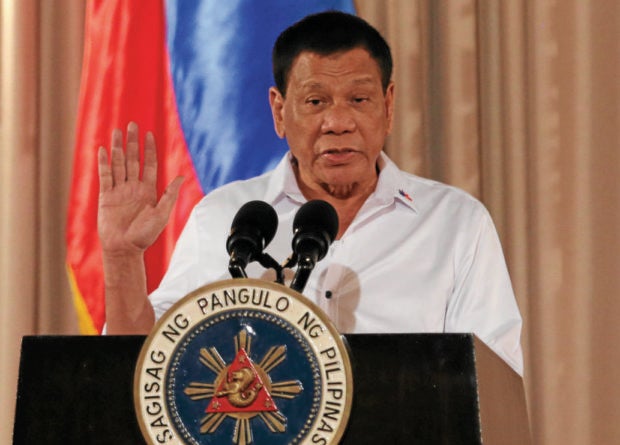 MANILA — President Duterte said on Monday he would  support the establishment of a constitutional “Bangsamoro country.”

“May I say to you, my brother Moros, that I commit to support,” Mr. Duterte said.

“And there will be no objections of the provisions, of all that is consistent with the Constitution and aspiration of the Moro people,” he said in a speech during the turnover ceremonies of the new draft of the Bangsamoro Basic Law in Malacañang.

“I am for this. Within the context of the Republic of the Philippines, there shall be a Bangsamoro country,” the President added.

Mr. Duterte described the event as “a significant step forward in our quest to end centuries of hatred, mistrusts and injustice that caused and affected the lives of the millions of Filipinos.”

“The draft BBL embodies our shared aspirations of a peaceful, orderly and harmonious nation after decades of armed struggle and violence. We will come up with a constitutionally consistent legal instrument that will lay the foundation for establishing the real and lasting peace in Mindanao,” he said.

He said the proposed BBL “puts into life and spirit the constitutional mandate provided in the 1987 constitution for the establishment a truly autonomous region in Muslim Mindanao.”

“This paves the way for meeting the just aspiration of the Bangsamoro people for self-determination,” he said, stressing that this would be “realized while preserving and strengthening the territorial integrity of the republic of the Philippines.”  SFM