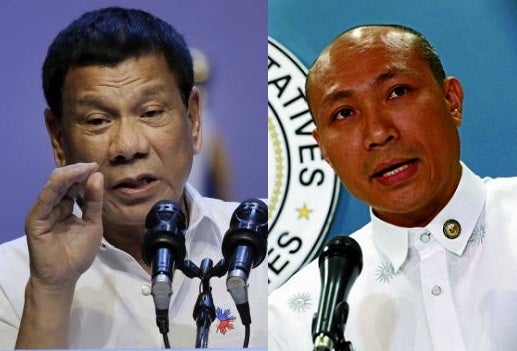 MANILA — One year after President Duterte took office, his government has shown its lack of a sense of organization and direction, Magdalo Party-list Rep. Gary Alejano said in his counter-State of the Nation Address on Sunday.

Alejano, along with Senator Antonio Trillanes IV and several minority lawmakers associated with former President Benigno Simeon Aquino III, delivered their adverse assessment of Mr. Duterte’s first year in office at the “So Ano Na? (So What Now?)” event on Sunday.

Alejano, a former coup plotter against the Arroyo administration and the lawmaker who filed an impeachment complaint against Mr. Duterte, said the government “has no coordination because the ones at the top have not given directions.”

“Government officials ended up explaining, interpreting, justifying, and clarifying what Duterte has been saying. People are left with the burden of guessing whether Duterte is joking or is serious about certain issues,” he said.

Alejano criticized the President for being “divisive,” as allies supposedly demonized institutions and discredit critics of the administration.

“I hope everyone understands that there is no ill will in being critical of the administration’s policies. Criticism is not destabilization. Our opposition is not just for the sake of opposing. This is just part of a citizen’s duty to ensure the interests of the many will prevail,” Alejano said.

On the issue of national security, he said the President should not look at the matter as “purely military… like war or killing is the answer to the threats.”

He said Duterte had shifted the focus of the development of the Armed Forces of the Philippines to internal security to avoid suspicions on Beijing’s part.

For Alejano, this has been a 180-degree turn from the Aquino administration’s thrust, which he claimed “is causing confusion among the ranks of the soldiers.”

Alejano also called out the President for “courting” the military’s support for his “agenda” of placing the country under martial law. He bemoaned that it took decades for the AFP to “shake off the image and stigma of Martial Law of the Marcos regime.”

“Let’s avoid returning our AFP to its state in the past,” he said.

As for the Philippine National Police, Alejano said the Duterte administration’s controversial war on drugs “places the PNP’s professionalism in extreme danger.”

“Despite our efforts to guide the PNP in following the law and respecting human rights, in one fell swoop, Duterte changed this and redefined due process of law and human rights,” he said, citing the
President’s assurance to policemen that they would not be arrested, as well as the recent reinstatement to the police service of Supt. Marvin Marcos, the former leader of the Criminal Investigation and Detection Group in Eastern Visayas who has been charged with homicide for the killing of suspected drug distributor Rolando Espinosa Sr. in a Leyte jail.

He said the increase in murder rates, without a single vigilante being held accountable, should not be considered “genuine peace and order.”

On the issue of Duterte’s so-called “independent foreign policy,” it is “not about making enemies but rather it is about making friends with everyone while maintaining our sovereignty,” according to Alejano.

However, he said Duterte had only lashed out against traditional allies like the United States, the European Union and the United Nations because of their criticism of the human rights abuses that attended the anti-narcotics campaign.

“That image has certainly affected and will continue to impact our relations with other countries and the aid and investments that come along with it,” he said.

On the other hand, Alejano called out Duterte for “cozying up to China and Russia to the point where our own national interests are undermined.”  SFM