Trillanes: Marcos reinstated for fear that he would rat on Duterte | Inquirer News
Close
menu
search

Trillanes: Marcos reinstated for fear that he would rat on Duterte 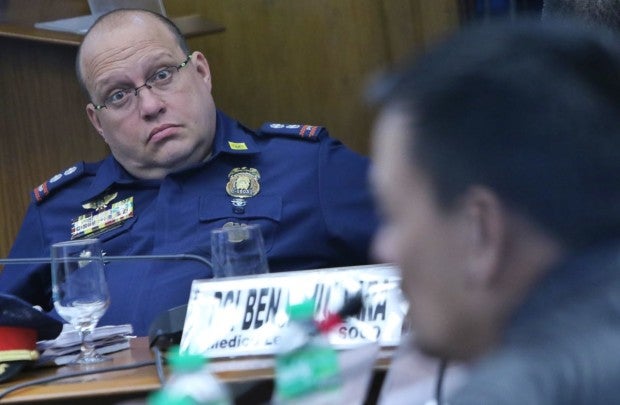 Why did President Rodrigo Duterte order the reinstatement of the cops behind the murder of Albuera, Leyte Mayor Rolando Espinosa Sr.?

For Senator Antonio Trillanes IV, Duterte’s staunch critic, it was because the President is afraid the team of Supt. Marvin Marcos would incriminate Duterte in the murder of Espinosa.

“Duterte not only set the murderers free, he now gave back their badges and guns so they could murder again with impunity. Why? Because Duterte fears that these policemen might rat out on him for what they know about his involvement in the Espinosa murder,” Trillanes said in a text message to reporters on Thursday.

Trillanes then recalled that Duterte himself ordered Marcos reinstated despite Espinosa linking the latter to the illegal drug trade in Eastern Visayas.

“Remember, it was divulged during the hearings that right after assuming office on June 30, Duterte had Marcos and company reassigned to CIDG-8,” he said.

CIDG-8 is the Criminal Investigation and Detection Group’s Eastern Visayas unit based in Leyte which Marcos led during the time of Espinosa’s arrest.

“But when Gen. Dela Rosa relieved them for being implicated by Espinosa in the illegal drug trade and, at the same time, not having the required schooling to be assigned at CIDG, it was Duterte himself who ordered Dela Rosa for their immediate reinstatement. Then just a few weeks after, Espinosa ended up getting murdered by Marcos’ group,” Trillanes said.

Another minority senator, Bam Aquino, also condemned the reinstatement of the “murderous cops.”

“The reinstatement of murderous cops is a danger to the Filipino people. Ito’y malinaw na pagbalewala sa mga umiiral na batas at nagpapalakas pa sa kultura ng karahasan (This is a clear disregard for the prevailing laws and encourages a culture of violence),” Aquino said in a statement.

Aquino urged the Duterte administration to stop coddling criminals in the police force.

“Kailangan managot ang mga gumagawa ng krimen – kahit pulis, kahit makapangyarihan, at kahit kaibigan ng pinaka-makapangyarihan,” he said.
(Criminals must be held accountable—even the police, even those in power and even those close to the powerful.)

Also on Thursday, Senator Sherwin Gatchalian, during the Kapihan sa Senado forum, said Duterte’s move would send a “very bad signal to the scalawags in the police force.”

“Ayaw nating lumakas ‘yung loob nitong mga scalawags (We don’t want the scalawags gaining confidence). What we want is a police force that respects the law and abides by the rules of the PNP (Philippine National Police). We don’t want to breed impunity,” Gatchalian said.

In November last year, 18 members of CIDG-8 raided Espinosa’s cell inside the Baybay City jail in Leyte. Police said Espinosa shot it out with the operatives, prompting them to open fire on him. Espinosa and his fellow inmate Raul Yap died in the raid.

But an investigation by the Senate and the National Bureau of Investigation (NBI) found that the killing was premeditated. The NBI said the operation was a rubout. IDL