AFP: One bomb falling off target an ‘unfortunate accident’ 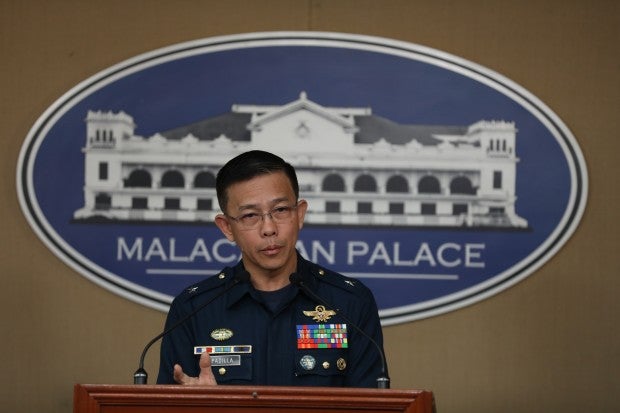 The second incident of friendly fire that killed two soldiers and injured 11 others is an “unfortunate accident,” Armed Forces of the Philippines (AFP) Spokesperson Brig. Gen. Restituto Padilla said on Thursday.

“This is different from the first fire incident, by the way, and we consider this an unfortunate accident because the airstrike they were conducting yesterday around noon was specifically aimed to target a building that was held by quite a number of the enemy,” Padilla said in an interview on the news program ANC.

Of the four bombs dropped, Padilla said, one fell off the target by about 200 meters and hit a building where the government troops were staying. The explosion caused the building to fall and the debris hit the soldiers, killing two and injuring 11 others, he added.

“This one bomb which went off target is the cause of our investigation now. We’d like to find out what caused it, because the aircraft that was involved had already done almost 70 missions and all of those missions had their bombs falling right on target, and it was only this specific circumstance when such thing as this one happened,” Padilla said.

The AFP official added that the percentage of success was very high if the statistics would be considered, alluding to the 70 plus missions conducted successfully in Marawi City.

“So we’re closely looking at that from the angle of material-oriented factor, and then later on, we will also take a look at the human factor that may have been involved,” he said.

Asked about the convergence of material and human factors, Padilla said the human factors is a very important thing, “because behind the machine is the human itself.”

“Now in the case of this one particular airstrike or one particular mission, one bomb fell short and almost hit our men, and this is something that we have to look into because a material failure of sorts may have occurred following 70 plus sorties, or a procedural lapse may have been overlooked for the side of a human angle,” Padilla added.

Asked further about the bomb factor, Padilla said he was uncertain about it.

“We will not leave any stone unturned and that is the duty of the investigating body to look at all angles,” he said. Rogelio Nato Jr., INQUIRER.net trainee / JPV