(2nd update, 4:30 p.m.) A youth group on Wednesday filed an administrative complaint for breach of the code of ethical conduct against Justice Secretary Vitaliano Aguirre II for allegedly using his position to spread fake news.

Akbayan Youth, Millennials Against Dictators, and other youth groups went to the Office of the Ombudsman to file an administrative complaint against Aguirre for violating Republic Act 6713 or the Code of Conduct and Ethical Standards for Public Officials and Employees.

Aguirre apparently used a photo of the senators published in a fake news blog as basis to make the allegation.

After earning backlash, Aguirre claimed he was misquoted by the media.

(We call Vitaliano Aguirre ‘fake news king’ because he made the position of a secretary of justice a factory of fake news. We believe that the truth should be the foundation of justice.)

Bulangis said they hope to remove Aguirre from office by filing the administrative complaint against him.

“Naniniwala kami na ang pundasyon ng hustisya ay ang katotoohanan….Isa sa mga gusto naming mangyari ay matanggal siya sa posisyon dahil hindi niya deserve and posisyon na yon. (We believe that the foundation of justice is the truth…One of the things that we would like to happen is his removal from his office because he does not deserve that position) ” Bulangis said

Millenials Against Dictators convenor Karla Yu called out Aguirre’s “misuse and abuse of power” by using his department to spread misinformation.

Yu called out others to take a stance against Aguirre and other public officials who may be involved in spreading fake news.

Yu said that even Presidential Communications Assistant Secretary Margaux “Mocha” Uson, a rabid supporter of President Duterte and who uses her Facebook account to spread fake news, should also be held accountable, urging the public to file a similar case against her.

“Asec. Mocha should also be held at the same standard. If there are those who want to file a case against her, then we highly encourage that as well.” Yu said.

The youth group hoped that Aguirre would resign or would be fired from his position.

The groups filed the administrative complaint against Aguirre for violating Section 4 of Republic Act 6713 “when he repeatedly made unsubstantiated public accusations and allegations thus failing to discharge his duties with the highest degree of excellence, professionalism, intelligence and skill.” 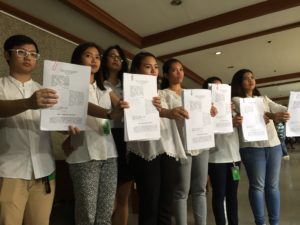 Representatives of various youth groups file an administrative complaint against Justice Sec. Vitaliano Aguirre II before the Ombudsman for allegedly being the “King of Fake News.” MARC JAYSON CAYABYAB/INQUIRER.net

“Respondent made serious allegations that warranted careful scrutiny over the facts and evidences at hand… Respondent’s flipflopping statements regarding his accusations cast doubt as to his competence as Justice Secretary when the three public officials he accused claimed that their whereabouts were easily verifiable through public records,” the complaint read, referring to the unverified Marawi meeting allegedly involving opposition lawmakers.

The complainants also slammed Aguirre’s refusal to apologize for his unverified allegations.

“Respondent’s fault however does not end at skirting his duties as Justice Secretary and misleading the public with his outright lies. His refusal to publicly apologize for his actions amount to conduct unbecoming of a public officer and clearly indicate his lack of probity and accountability,” the complaint stated.

The groups also accused Aguirre of violating Section 1 of Article XI of the 1987 Constitution “when he refused to take responsibility for his actions as Secretary of Justice despite publicly making fake and misleading accusations and allegations.”

The complainants said Aguirre is unfit for public office for his “propensity” to spread misinformation.

“Respondent’s propensity to make unsubstantiated and even fabricated allegations render him unfit for public office since continued actions erode public trust in government and more particularly in our justice system,” the complaint stated.

The groups also cited other instances when Aguirre made unverified allegations in the DOJ’s probe on the Bilibid drug trade and the murder of Korean businessman Jee Ick-joo.

Aguirre claimed Lalaine Madrigal Martinez, wife of Bilibid drug trade witness Noel Martinez, was ambushed even though the police has denied such an incident.

Aguirre even presented photos of a bloodied Martinez and her car hit with a lone bullet to belie criticisms the ambush was fake.

Aguirre cited Martinez about an alleged P100-million bribe offer to the Bilibid convicts to recant their testimonies against Senator Leila De Lima, who is detained on drug sale charges over the alleged trade at the national penitentiary.

The groups also cited Aguirre’s claim the Korean mafia was involved in the kidnapping and murder of Korean businessman Jee Ick-joo, who was apparently murdered in Camp Crame by rogue cops.

Aguirre made an unverified allegation in a Senate hearing that the Korean embassy is compromised by the mafia, an accusation the embassy vehemently denied.