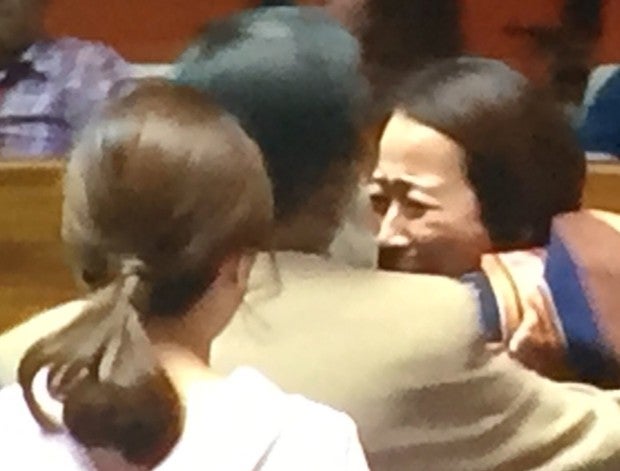 A Laguna representative accused by Justice Secretary Vitaliano Aguirre II of bribing inmates of the New Bilibid Prison broke down to tears as she disputed the allegation.

During the session at the House of Representatives on Monday, Biñan City Rep. Marlyn Alonte-Naguiat delivered a privilege speech denying Aguirre’s “baseless and false accusations.”

“I do not subscribe to illegal acts… I’m one with the administration in aiming for a Philippines free of drugs and corruption. This is my dream for my own children and every young Filipino,” Alonte-Naguiat said.

Alonte-Naguiat said she was discouraged from making a privilege speech which would effectively put the allegation in the pages of the history books of Congress.

But she said she had to do it to clear her name.

(If I will not stand up for myself, who will? If I will not clear my name and I’ll just be quiet, what will my constituents think of me?)

The former Liberal Party lawmaker who jumped to the ruling Partido Demokratikong Pilipino-Lakas ng Bayan (PDP-Laban) admitted that she had ill feelings about the party after Aguirre accused her of bribing the Bilibid inmates for them to retract their statements against Senator Leila De Lima.

De Lima is arrested on drug-related charges as alleged by the high-profile inmates who testified in a House inquiry on the proliferation of drugs at the national penitentiary when De Lima was justice secretary.

(I’ll admit it, I had ill feelings. I thought, is this the government I am fighting for? Is this the party I joined?)

She later realized that the administration does not want to appear biased toward its party mates.

(I may not be wrong, after all. I only tell to myself that the government is impartial whether or not you are a party mate.)

She wiped away tears as she expressed gratitude to those who supported her amid the allegations.

A distraught Alonte-Naguiat was welcomed with hugs by her fellow congresswomen after delivering her speech.

Aguirre had alleged that Alonte-Naguiat and former senator Jamby Madrigal offered a P100-million bribe to high-profile inmates to recant their testimony against De Lima, in a bid to lure people into joining the People Power rallies during the weekend and make De Lima a victim of political persecution.

READ: Jamby Madrigal: Aguirre owes me an apology for another ‘bum steer’