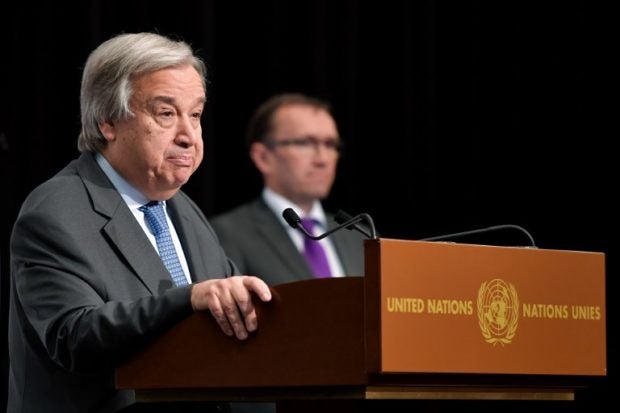 “This action is yet another brazen violation of Security Council resolutions and constitutes a dangerous escalation of the situation,” Guterres said in a statement.

He added that North Korea’s “leadership must cease further provocative actions and comply fully with its international obligations.”

The Security Council is expected to meet Wednesday for an emergency closed-door meeting after Pyongyang declared that it had successfully tested its first intercontinental ballistic missile.

US Ambassador Nikki Haley on Tuesday spoke by phone with China’s Ambassador Liu Jieyi, who holds the council presidency this month, to convey the US request for an urgent meeting.

Guterres stressed “the importance of maintaining the unity of the international community in addressing this serious challenge,” in a reference to US-Sino differences.

China is pushing for talks between world powers and North Korea on dismantling its nuclear program but the United States maintains that Pyongyang must first halt its missile and nuclear tests.

North Korean leader Kim Jong-Un oversaw the launch of the Hwasong-14 missile which experts say is capable of reaching Alaska.

US Pacific Command confirmed the test and said it was a land-based, intermediate-range missile that flew for 37 minutes before splashing down in the Sea of Japan. It said the launch did not pose a threat to North America.

The launch came as Americans prepared to mark Independence Day, prompting President Donald Trump to urge China — North Korea’s main diplomatically — to act to “end this nonsense once and for all.” CBB