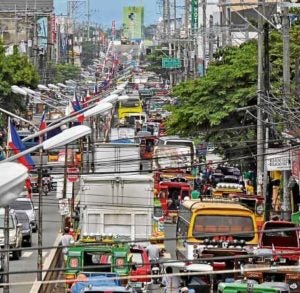 WASTED TIME With traffic congestion, the usual commute that takes 10 to 15 minutes within Cebu City now stretches up to an hour. —JUNJIE MENDOZA/CEBU DAILY NEWS

CEBU CITY — Health care executive Clyde Teves has to be out of his house in Carcar City in southern Cebu before sundown.

He has to catch the 4:30 p.m. bus that arrives at the terminal on Natalio Bacalso Avenue in Cebu City about 7 p.m.

Teves has enough time to ride a jeepney to his office at Cebu IT Park in Barangay Lahug, Cebu City, before his work starts at 8 p.m.

In the past two months, it took two and a half hours to get to Cebu City from Carcar, a distance of 42 kilometers, due to fiestas and road repairs. Previously, the trip took about an hour and 30 minutes.

Despite the promise of the Duterte administration to solve the traffic problem in Cebu, nothing has changed since the assumption of the new administration on July 1, 2016, Teves said. In fact, he noticed that the problem has worsened.

The usual 10-to-15-minute ride within the city now stretches up to an hour.

Shaneen Bargamento, 22, a investment trader from Lapu-Lapu City on Mactan island, said traffic congestion got worse the past year because of the rise of more subdivisions on the island and the proliferation of cars due to easy loan schemes.

She also blamed the defective traffic lights in Lapu-Lapu and traffic enforcers, who decide when to let vehicles pass through intersections.

Road congestion has been identified as one of the major problems in the bustling metropolis.

As early as July 2012, a study made by the Japan International Cooperation Agency (Jica) showed that at least P132 million worth of man-hours was wasted daily due to traffic congestion. The situation in Cebu five years ago was not as bad as today’s.

The existing infrastructure simply cannot cope with the growing number of vehicles.

The Land Transportation Office in Central Visayas said the number of newly registered vehicles increased by 11,120 to 152,476 from January to November last year.

The Cebu Business Club president, Gordon Alan Joseph, said he was surprised by the lack of improvement in the traffic situation.

“[E]veryone is focused on big-ticket infrastructure projects, completely forgetting the basics,” he said. These include poor driver education and inadequate licensing requirements, poorly trained and uncoordinated traffic enforcers with no communication facilities, and inconsistent enforcement of traffic laws.

“If we work and focus on traffic management, there will be an immediate alleviation of the traffic [problem], but no one is focusing on these and I am very surprised,” Joseph said.

In a statement, Presidential Assistant for the Visayas Michael Diño said the traffic situation in Metro Cebu needed unified efforts of national and local governments.

The Department of Public Works and Highways (DPWH) and the Department of Transportation will implement infrastructure projects and a mass transport system in the metropolis to address the problem.

These include the P50-billion Metro Cebu Expressway, a 74-km highland road mixed with a subway that will snake through Naga City in the south to Danao City in the north.

Two coastal bypass roads are also in the pipeline.

One project worth P25.5 billion provides an alternative route to connect Mandaue and the towns of Liloan and Consolacion in the north. Another, worth P15.5 billion, links Talisay City, Minglanilla town and Naga City.

The DPWH also plans to build the P683-million underpass on N. Bacalso Avenue and F. Llamas Street in Cebu City.

The construction of a P1-billion, 2-km road artery from V. Rama Avenue to Gorordo Avenue is expected to start in 2018.

Diño said local government units were responsible for handling the traffic situation in their respective jurisdictions.

Cebu City is implementing a P10-billion Bus Rapid Transit (BRT) project, which aims to replace passenger jeepneys with buses. Diño, however, was not too keen on the BRT but was instead pushing for a Light Rail Transit system to decongest Metro Cebu’s traffic.

Glenn Soco, Mandaue Chamber of Commerce and Industry president, said it seemed unfair that Mr. Duterte would carry the burden of solving the traffic problem across the country.

“We have to understand that traffic is a result of progress. If we want to be the fastest-growing economy in Asia, then we have to anticipate more challenges,” he said.

Soco said a multiagency and multisectoral approach was needed to address the problem, pointing out that the government is already taking steps to fill infrastructure gaps that would serve as “partial solutions” to metropolitan Cebu’s traffic problem.

Political will, behavioral change and the proper mindset were needed to cope with the situation, Soco said.

Melanie Ng, president of the Cebu Chamber of Commerce and Industry, said she was confident that plans were moving for Cebu and that the government was committed to solve the traffic problems.