Duterte: Decision to extend martial law up to military 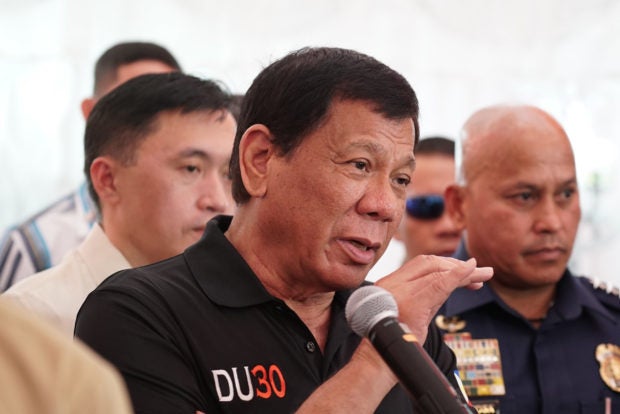 CITY OF SAN JOSE DEL MONTE — Saying it remained the decision of the military, President Rodrigo Duterte on Tuesday said he could not say whether he would extend martial law in Mindanao after the Supreme Court dismissed all petitions challenging his Proclamation No. 216.

“I am not a [pollster]. I do not go around getting the opinion of people [as to whether] they are already safe or not,” the President said at the wake of five members of a family in Bulacan who were stabbed to death in their home on June 27 by an allegedly drug-crazed man.

Mr. Duterte said he decided to impose martial law on May 23 after the Armed Forces of the Philippines and the Philippine National Police told him while he was on a visit to Russia that “the situation was critical” in Marawi City following the rampage of Islamic State-allied gunmen.

“Our No. 1 duty is to protect and defend the Filipino people,” he said.

“There is a peculiar phenomenon in the Philippines. [People] are so tolerant about the killings perpetrated by drugged people. That’s only drugs. They do not know drugs are also fueling the insurrection in Marawi,” Mr. Duterte told newsmen.

The Constitution limits the martial law declaration to 60 days.

PNP chief Ronald dela Rosa told reporters on Tuesday that he spoke with AFP Chief of Staff Gen. Eduardo Año during a Cabinet meeting in Malacañang and that the two were “inclined to recommend to the President” an extension of military rule.

Dela Rosa said the situation in Marawi had “not totally stabilized” and that an extension of martial law could cover the rehabilitation phase.

But he added: “Things may vary as days go by. We don’t know if things will get better tomorrow and we’ll no longer have problems there. Why would we need to extend if there is no longer a problem?”

Año said in a statement: “The mission is not yet done but we can assure our citizens that we are focused and determined to carry on the fight till peace and order in Mindanao is fully restored and the liberation of Marawi is achieved at the soonest time possible.” —With reports from Jeannette I. Andrade, Philip C. Tubeza, DJ Yap, Christine O. Avendaño, and Nikko Dizon in Manila