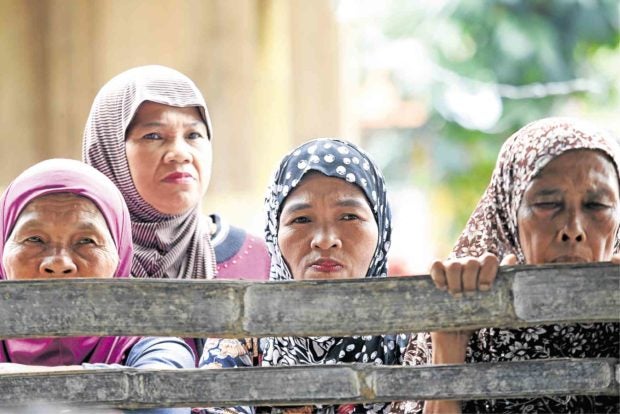 DISPLACED Maranaos displaced by fighting in Marawi City have sought temporary residences in communities away from their home city. Others, however, are staying and waiting to be housed in an 11-hectare “tent city” in the village of Sagonsong. —JEOFFREY MAITEM

CITY OF SAN FERNANDO — The Central Luzon police on Tuesday encouraged 200 Muslim leaders in the region to adopt an identification (ID) system similar to the one being enforced in Tarlac province’s Muslim communities to prevent the spread of terrorism and lawlessness.

The Tarlac police and the local governments of Paniqui town and Tarlac City implemented the ID scheme after President Duterte declared martial law in Mindanao when the Islamic State-backed Maute terror group and Abu Sayyaf bandits took over parts of Marawi City on May 23.

Some 2,000 Marawi City residents, who moved to the Tarlac provincial capital prior to the Marawi attack, were required to bring their ID cards and present these when asked by authorities, said Abdul Jabbar, a leader of the United Muslim Association of Tarlac (Umat).

“This best practice (Tarlac ID system) can be replicated in Central Luzon,” said Chief Supt. Aaron Aquino, regional police director, on the sidelines of a Muslim Leaders’ Forum at Benigno Aquino Hall in this Pampanga capital.

Top police officials and military commanders discussed the Marawi City situation and the strides made in the campaign to defeat terrorists.

Most of the 26,000 Muslims in Central Luzon hail from Marawi City, many of them traders, Aquino said. He said 103 mosques have been put up in the provinces of Aurora, Bataan, Bulacan, Nueva Ecija, Pampanga, Tarlac and Zambales for local communities.

In the forum, no Muslim leader questioned the ID proposal’s potential impact on civil and political rights.

Lawyer Jasmin Regino, regional director of the Commission on Human rights, said an ID system among Muslims is “discriminatory.”

“It is a form of branding, segregation,” she said when asked for comments on the proposal.

Jabbar said the Tarlac ID system had been helpful in sorting out new migrants from longtime residents. “We are able to control who do not belong to our group [Umat]. We don’t want the Marawi City problem to happen in Tarlac City,” Jabbar said.

The Tarlac ID cards were issued to persons aged 11 and above. Settlers are required to present themselves to Umat leaders to verify their identities and purpose of staying in Tarlac.

Muslims in the San Isidro resettlement in Magalang town in Pampanga province have not relied on any ID system, according to their leader, Masa Ampuan. “But we know the new faces. We have a way of knowing them,” he said.

Aquino assured the assembly that no Maute group member was operating in Central Luzon, amid what he described as “fake news” about supposed plots to bomb oil depots and shopping malls in the region.

“There is no direct threat to our region. We have been preventing terrorists from [setting up a base] in Central Luzon through our enhanced intelligence efforts,” he said.

In Cotabato City, police released four persons, all surnamed Maute, after investigators finished validating their identities and learned that they had no ties to the leaders of terrorists who seized a section of Marawi City in May.

Supt. James Allan Logan, regional director of the Criminal Investigation and Detection Group in the Autonomous Region in Muslim Mindanao (CIDG-ARMM), said the local government of Marogong in Lanao del Sur province confirmed that Alimatar, Apok, Saida and Mohammad Ali, all surnamed Maute, had been cleared of any relationship, by blood or by affinity, with the Maute terrorist group.

The Mautes, Logan said, presented documents showing they were law-abiding citizens and went to Cotabato City to apply for clearance from the National Bureau of Investigation.

Apok, on the other hand, is a retired school principal, also in Marogong.

Logan said the Mautes, while in CIDG-ARMM custody, were treated well and were not detained. —With a report from Edwin O. Fernandez